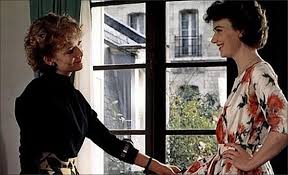 This week, Classic Couple Academy explored the biographical film Entre Nous (1983) from Diane Kurys. The film, originally released under the French title Coup de Foundre, meaning love at first sight, portrays a series of love stories connected to Kurys’ mother. We witness the fateful meeting of her parents in a 1942 French detention camp and 10 years later the introduction of her mother to a woman who changes the trajectory of her life.

How did the filmmaker instill believability in the story?

Entre Nous tells the story of a marriage of convenience that transforms to one of obligation. While centrally the film focuses on character, the settings very much confirm the believability of the story. The hopelessness saturating a French detention camp fully reinforces the desperate move central character Lena makes to marry a man she does not know just to escape. The improbability of their marriage lasting quickly becomes not so improbable as they flee to Italy and bond as survivors. After the war, the comfortable surroundings of the life Lena and husband Michel have built in Lyon reinforces the unwillingness of this mismatched couple to let one another go.

What individual character introduction was most memorable?

The introduction of Costa, husband of Madeleine, stands out. Costa is terribly inconvenienced at having to be the responsible parent at a school play. He’s impatient and unabashedly cruel to his son in front of the other children. Exasperated and desperate to dispatch of his fatherly duties, we pivot to Costa the con man who charms Lena, a woman he has never met but carefully picks out of the audience, into minding his son so he can leave. The viewer gets a full view into Costa a self-centered, scamp capable of duping those he meets into doing his bidding.

What “meet cute” encounter between characters captured your attention and why?

The introduction of Michel to Lena in the form of a marriage proposal promising freedom from the detention camp foreshadows his controlling role in her life. Their actual in-person introduction, a pivotal “meet cute” at their wedding, foreshadows their entire relationship. Here, as she is asked to say “I do,” Lena discovers Michel’s real name and its clear designation as Jewish. Despite her hesitations that this marriage could only further her complications during the war, she goes through with it. As Michel says in his last line of the film so many years later, “it was a mistake.”

Bonus: How did the Women Make Film believability, introducing character or meet cute chapter material influence how you watched this film?

The two titles of this film and their meaning truly convey it is a masterful study in character. Entre Nous translates to just between us. Coupe de Foundre translates to love at first sight. Both describe the relationship of Lena and Madeleine. Their bond is immediate and, as their friendship evolves, the intimacy they cultivate in female empathy and shared dreams changes their lives forever. As a biographical account, Entre Nous is the perfect vehicle for the Women Make Film chapters on believability, introducing character and meet cute.

Did you watch Entres Nous? We’d love to hear your take in the comments.