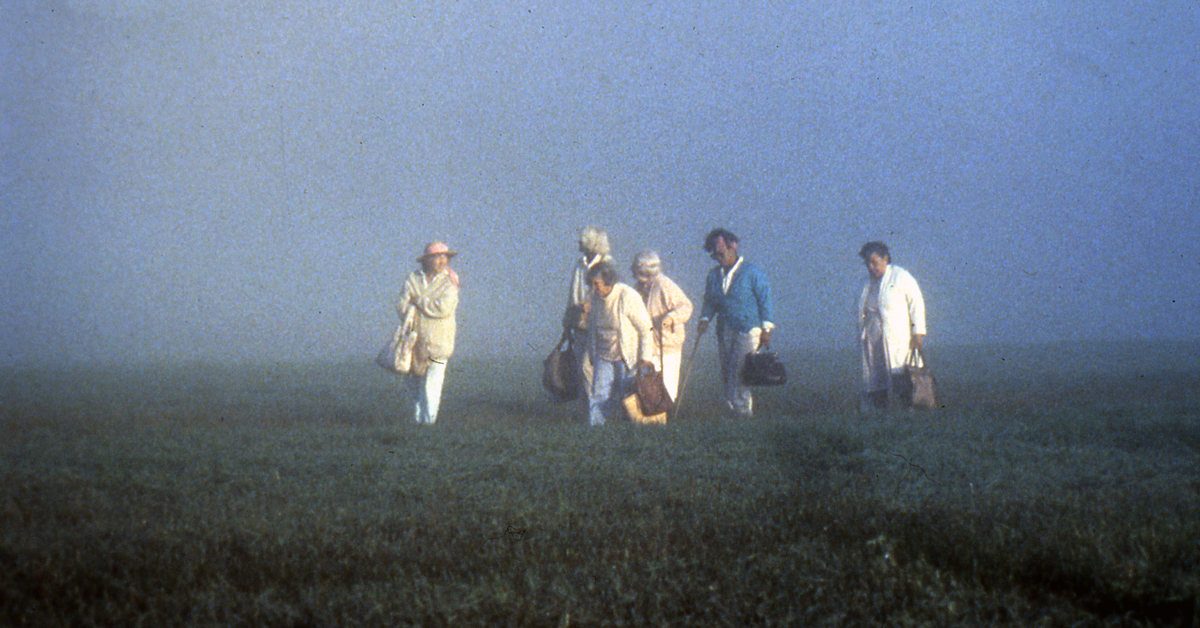 This week, Classic Couple Academy discovered Strangers in Good Company (1990) directed by Cynthia Scott. The film, released in Canada as The Company of Strangers, features eight women stranded at an isolated lakeside farm and cottage after their tour bus breaks down.

Strangers in Good Company is the ideal study film for the Women Make Film: A New Road Movie Through Cinema chapters on conversation and framing in particular. While the film was structured around the plot of eight women, seven of them elderly, pulling together to face the challenges of their predicament, the film had no primary script for the women to follow. The women, all amateur actresses in the film, use their real names, reference their real experiences, and at various points in the film photo montages from each of their own lives are shown. The film is a work of docu-fiction.

How did the filmmaker use conversation to reveal the film’s story world?

Most of the dialogue in Strangers in Good Company is improvised. The women interact with the setting and their situation, but their conversations with one another are ad libbed.

Throughout the film, we get to know each of them as they reveal their personal histories to one another in this shared survival experience. They reveal their individual health truths while describing their morning pills to one another. While they forage for sustenance and supplies, they share stories of their youth. At night as they desperately fight back their fears, they tell tales of surviving trials and tribulations in their lives. Everything we come to truly know about the women is revealed through conversation.

What conversation in the film stands out for you and why?

A particularly poignant conversation in a film centered on conversation is one between Mary and Cissy as they go bird watching. Here while Mary as the skilled birdwatcher instructs novice Cissy where to train her binoculars, she reveals that she never had children and lived her life as a lesbian. This deeply personal revelation, one that profoundly impacted how Mary lived her life, coincides with the two women looking for birds hidden in the trees. Both the activity and the conversation center on revealing the hidden. Cissy’s completely accepting and empathetic reaction to Mary’s news stands out as one of the most touching exchanges among the eight women.

How was framing used to show individual emotion or the relationship between characters?

Throughout the film, much of the framing when the women have conversations with one another focuses on the speaker. The camera moves back and forth from speaker to speaker as if they hold a tribal talking stick where only they have the right to speak and all others must listen respectfully. In these frames the women reveal some of the most intimate details of their lives and display the depths of their personalities. Taking up space singularly in the frame their emotions – joy, fear, sadness – are fully felt.

Bonus: How did the Women Make Film conversation, framing or tracking chapter material influence how you watched this film?

The stranded women in Strangers in Good Company set out from their broken down bus to find shelter. Their quest leads them through a field enveloped in fog. As they trudge into view, we hear them talking, encouraging and helping one another on the path. They enter our focus through this one frame revealing that this group must depend on each other.

The film closes the same way as the group of women retreat back down the path to return to their lives. Again they huddle to help and steady one another as they talk. Their dependence on one another transformed through this experience into real connection. They track into and through the frame, their conversation fades and they disappear from view.

The Women Make Film content on conversation, framing and tracking significantly impacted viewing these two pivotal scenes and their importance in the film.

Did you watch Strangers in Good Company? Another film featured on TCM? We’d love to hear your take in the comments.