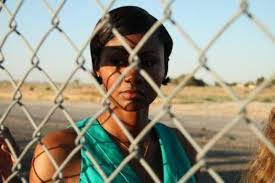 This week, Classic Couple Academy viewed Middle of Nowhere (2012) directed by Ava DuVernay. It’s the story of Ruby, a nurse in Compton, coming to terms with life on her own as her husband serves an eight-year prison sentence. The film spans her visits to the prison early in his sentence onward to his parole hearing four years later and beyond. She struggles to come to terms with life without him and the life she needs to build for herself.

What adult/child relationship stands out as important to the story?

Truly, a standout scene in Middle of Nowhere comes when Ruby and her sister and nephew are having a meal together at their mother’s house. Their mother, played to perfection by Lorraine Toussaint, launches into a rant in which she challenges both of her girls to make something more of their lives. She recalls her own struggles as a woman and her disappointment in Rosie as a single mom and in Ruby for giving up on medical school. Lorraine believes both of her daughters are living life in suspension, and she urges them to take control of their lives. The powerful scene shines a spotlight on Ruby’s resistance to move forward with her life.

How was economy – things left out or fragments – used to move the story?

It’s clear in Middle of Nowhere that Ruby is very much in love with her husband Derek. Her devotion to him keeps her from moving forward in her own life. As the film begins with Derek already incarcerated, viewers only see them together on the outside through flashback memories. DuVernay uses these fragments of the couple together in their marriage to offer glimpses into what was, and why Ruby doesn’t want to let go.

How did editing connect or disconnect parts of the story?

Middle of Nowhere is told as a series of vignettes. Most show Ruby’s interactions with the key people and influences in her life. Her life revolves around visiting Derek in prison, pursuing his legal battles, hanging out with her sister, seeking help from her mother, going to and from work. Paintin the picture of her outer life, these scenes allow viewers to connect with her inner life and emotional struggles.

Bonus: How did the Women Make Film adult/child, economy or editing chapter material influence how you watched this film?

Ava DuVernay made Middle of Nowhere with a budget of $200,000 and shot the film over 19 days. This is film-making economy at its best from a resource perspective. But the film is also shot with economy. Viewers only see what they need to see to understand Ruby’s life and her emotional journey.

Editing in the film is masterful, especially when showing the interactions between Ruby and Derek during her visits to see him in prison. Seldom do we see them in frame together, rather the camera fixes on him, then her, and back and forth. Through editing we see they are not only physically separated, but emotionally distanced. The bond of love they once shared when they were physically together is fractured and the gap between them widening as they are forced to live apart in such different circumstances from one another.

Did you watch Middle of Nowhere? Another film featured on TCM? We’d love to hear your take in the comments.