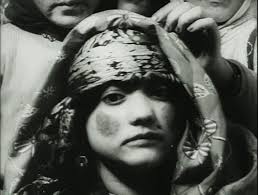 This week, Classic Couple spent time with Forough Farrokhzad’s acclaimed 1963 documentary The House is Black. The twenty-two minute short film features footage from the Bababaghi Hospice leper colony in Iran. It focuses on scenes of the daily life and interactions of the colony residents spliced with Farrokhzad’s narration of her own poetry and quotes from the Old Testament and the Koran.

This real-world look at the impact of leprosy, also known as Hansen’s disease, and the damage the infection can do to a person’s nerves, skin, muscles, eyes and extremities is an impactful film to complement Women Make Film: A New Road Movie Through Cinema episode 7.

How were bodies or a singular body essential to the storytelling?

Leprosy, which is caused by a bacterial infection, has impacted humanity for thousands of years. It’s affects on the body, ranging from facial disfigurement and blindness to open wounds and loss of extremities such as feet and hands, drove lepers into colonies as outcasts from society. The House is Black provides an inside view leper colony residents in their daily lives. They are shown as patients receiving treatment for their afflictions. More so, they are shown as people living in community. They worship, play games, hold celebrations, gather as families, go to school. At its outset the film notes it will display “ugliness,” but its real message is not that the lepers are ugly physically in body, it is the stigma associated with the disease and the treatment of them as a shunned population that is the true ugliness.

What role did sex play in the film’s plot or character development?

Sex is not central to The House is Black, but family is. Leprosy has some genetic factors and often impacts families given that transmission is often among people who live in close proximity. The community in The House is Dark has women, men, and children of all ages at different stages of the disease. As an awareness-raising film, showing the impact on people and families engaged in activities “just like us” is the driving point of the film.

Bonus: How did the Women Make Film bodies and sex chapter material influence how you watched this film?

The House is Black ranks number 19 in The Sight & Sound Top 50 Greatest Documentaries of All Time, is listed in “1001 Movies You Must See Before You Die,” and has brought acclaim to Iranian filmmaking. While the film is knows as a must-see, its viewing is greatly enriched by the Women Make Film content on bodies. How filmmaker Farrokhzad presents the bodies of the lepers – contrasting their bodies in treatment as patients with their bodies in motion as people going about their daily activities – is a perspective that enhances the viewing experience.

Did you watch The House is Black? Another film featured on TCM? Share your take in the comments.