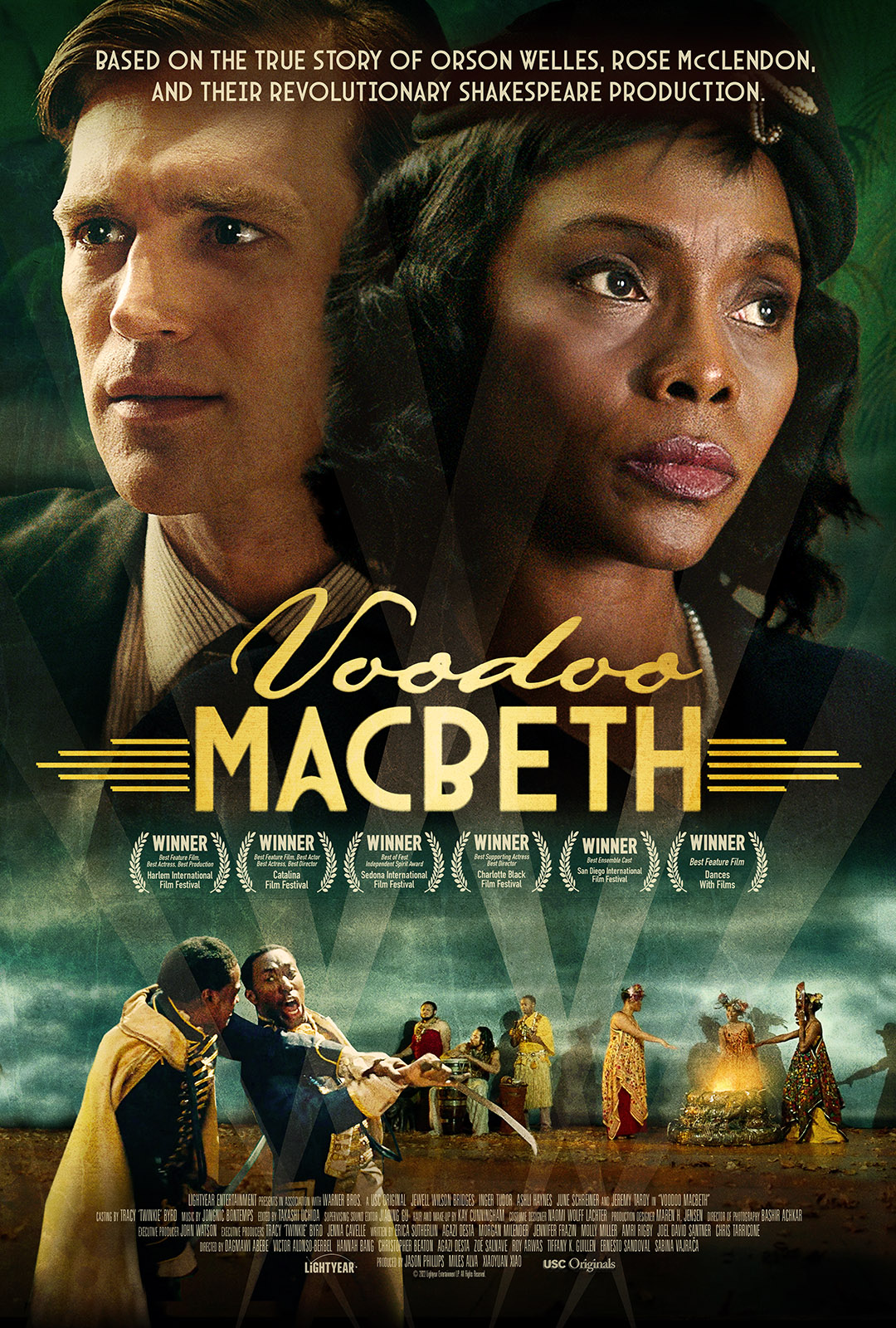 Before Hollywood director Orson Welles ascended to fame as producer, director and star of Citizen Kane (1941), he struggled as an actor and writer for radio. In 1936 at the age of 20, untested and battling addiction, Welles was enlisted by John Houseman, director of the Negro Theatre Unit in New York, to direct the first all-Black cast production of Macbeth on the stage. Houseman, along with co-director Rose McClendon, took a chance on the volatile Welles who convinced them to reimagine the Scottish play as a Haitian production daringly starring an all-Black cast.

Performed in Harlem at the Lafayette Theater, the production known as Voodoo Macbeth became a landmark in African-American theatrical history. Asked in 1982 about the project, Welles said, “By all odds, my great success in my life was that play, because the opening night there were five blocks in which all traffic was stopped. You couldn’t get near the theatre in Harlem. Everybody who was anybody in the Black or white world was there. And when the play ended there were so many curtain calls that finally they left the curtain open, and the audience came up on the stage to congratulate the actors. And that was magical.”

An equally magical production brings the story of the making of Voodoo Macbeth to the screen, some 86 years later. Voodoo Macbeth the film marks the first theatrical release from USC Originals in association with Warner Bros. Overseen by veteran producer and USC professor John Watson, Voodoo Macbeth represents the collaboration of 10 directors, eight writers and three producers, each embodying different perspectives, coming together to create a common vision.

Classic Couple Academy interviewed Jason Phillips, one of the three Voodoo Macbeth producers about the project.

Filmmaker 5.1: Voodoo Macbeth is based on true events. What source material was brought to the project to inform the filmmaking approach?

When I first came to the project, the writer’s had already been hard at work for several months. They had compiled a huge packet of research that they had been working off of and used to inform their writing process. I then had the pleasure of reading all of this incredible history and turning to one of my favorite research tools, Google. I tried to read, look at, and find everything that I could about Voodoo Macbeth, 1936 Harlem, Rose McClendon, Orson Welles, the theater scene in this time period, LGBTQIA+ history in the 30s, and any pictures that I could find from the original production. I really loved spending time looking at pictures of 1930s NY architecture because it helped me understand what types of interior locations I needed to look for in Los Angeles to help the world-building of the piece. Also, I happened to be in New York a few months before shooting the film and I took one day to walk around all of the blocks in Harlem where the events in the film actually took place. Even though the Lafayette Theater is gone now and so much has changed since 1936, as that was 86 years ago, it was special to see Harlem and the richness of culture it holds.

In terms of materials brought to the filmmaking approach, one of my favorite pieces that was used to inform both the production and costume design is the actual footage that exists of the original production of Voodoo Macbeth. In the National Archives and Records Administration there is a short documentary called We Work Again (1937) that shows the last five minutes of the original production. It is a truly remarkable piece of footage and was very inspiring to watch. The design of the piece helped inform the set build that we made in the theater and the costumes for the main actors on stage during the “play” scenes in our film. It is also remarkable to see the scale of the production that was mounted in 1936 and the audience reaction to the closing moments of the play. I highly recommend taking a moment to look this up and to watch this historic moment in theater history on film. The Library of Congress also has some very interesting sketches and photos of the original costumes, set design, and posters.

Also, when you go see the film, stick around through the credits for a fun surprise!

Filmmaker 5.2: How did the Voodoo Macbeth writing team of eight center their storytelling as collaborators on the script?

As a producer on this film, I came in towards the end of the writing process after the main bones of the story had already been formed. The writer’s worked in a highly collaborative environment similar to that of a television writers room. Each person pitched different ideas, took passes at writing various storylines, and worked as a team to construct the screenplay. As a team, one of our main focuses throughout the entire making of the project was the exploration of the many people that come together to make a theater production happen. With this ensemble nature of the film, each writer and creative involved later on in the process had the chance to explore the character and storyline that they felt a connection with.

As a team, our main focus was to bring the story of the making of Voodoo Macbeth to the screen. Many of us had never heard of Voodoo Macbeth and were surprised that this historic moment in history had yet to be explored in film. For us it was a chance to explore a 1936 event from a 2018 (the year the film was written) lens.

Filmmaker 5.3: Your directing team is truly global with backgrounds representing Ethiopia, Mexico, South Korea, Britain, Israel, Bosnia, Spain, and the U.S. How did you lead them to find both unity and uniqueness in their direction of the film?

As Producers, Miles, Ivy, and I were very blessed to have such a unique group of directors from completely different backgrounds. One of my favorite parts of producing is team-building and this film presented a unique challenge that few producers have faced before, uniting ten directors on one feature film.

At the beginning of the process, the script is divided into ten sections and then each section is assigned to a director. In the film, about every eight to ten minutes there is a new director. After we divided the script, each director went out on their own and did a test shoot of their section. They used their phones for a camera, friends as the actors (some of which ended up being cast in the film), and their houses as their locations. We then were able to put each director’s “test shoot” together to watch the film from start to finish. This allowed us to talk as a group about what visual stylistic choices we wanted to push further and the ones that we wanted to pull back on. It also allowed us to discuss the emotional arcs of the characters. After many group discussions with the directors, department heads, and producers we were able to land on what you see in the film today! I think that this pre-visualization of the film helped us all really understand the film that we were making.

One bonding activity for the directors that I championed at the beginning of the process was a Saturday Shakespeare intensive; I felt like it would be a great way for the directors to come together as a group and have a unique shared experience. I brought my high school acting teacher who also taught at UCSD, Kim Walsh, up from San Diego and she led them in a class where each director had to practice Shakespeare monologues! The goal was that this would help the directors communicate with the actors on set for the sequences that involved Shakespeare. It is my belief that these types out-of-the-box methods throughout the preparation process can be felt within the spirit of the film.

Filmmaker 5.4: The 1936 production of what became known as Voodoo Macbeth tells the story of artists committed to a production. How does this 2022 film project bring that commitment forward?

One of the prevailing themes in the film is community over the individual. This motto was brought to set every day and each person had to put their ego at the door. Making a period piece with limited resources is no easy feat but we knew how important this story was to tell. There was an air of excitement all around us and even on the hardest of days, I think knowing that the story we were telling was important was what got us across the finish line.

With eight writers, ten directors, three producers, a large ensemble cast, and a robust crew, our film embodies voices from many walks of life. Similarly to the film, the commitment of the artists behind the camera echoed the story that was being told on screen.

Filmmaker 5.5: As Voodoo Macbeth reaches a greater audience, what do you as a producer want audiences to discover in the film?

As a producer, it is my hope that people go home and look up more about Rose McClendon, the Federal Theater Project, the Negro Theater Units other productions and cities that had these units, and dig through the past to find the stories that have yet to be told. There are so many moments in history that have been erased and it is time for those stories to come into the light. I am extremely passionate about LGBTQIA+ people and our history and by working on this film, it propelled me to look deeper into the historic moments in my community that have yet to told. There is so much more than what the history books tell us and it is the stories that have been excluded that are the most important to talk about.

Make the projects that excite you, the stories that intrigue you, and the work that you can be proud of.