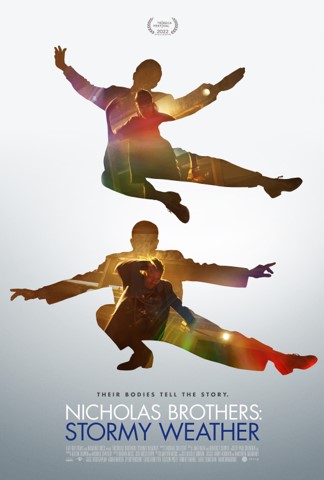 In the1943 film Stormy Weather, brothers Fayard and Harold Nicholas performed a dance routine—shot in one take with no rehearsal—regarded as the greatest dance routine ever put to film. Almost 80 years onward, that performance continues to amaze and inspire not just dancers, but dance as an art form. The short film Nicholas Brothers: Stormy Weather (2022) delves into the influence of the iconic dance sequence as a precursor to hip hop and its lasting impact on film history as a powerful statement on the talent and contributions of Black performers.

Nicholas Brothers: Stormy Weather, co-directed by Michael Shevloff and Paul Croder has several showings in New York City as part of the 2022 Tribeca Festival Shorts: Life, Camera, Action! programming and is available for viewing via Tribeca At Home.

Filmmaker 5.1:  The Nicholas Brothers’ dance sequence in Stormy Weather (1943) is considered the greatest dance sequence ever made on film. What story were you aiming to tell by centering your film around it?

That dance is considered their magnum opus and was a turning point for them and for cinema. It’s a masterpiece and we loved the idea of pivoting a story around it, with a modern reinterpretation, that illustrates their lasting impact. The original concept was actually birthed by Jake Nava and Benedict Cooper and we were just lucky to be invited in to the process.

Filmmaker 5.2:  What relationship did you foster with the Nicholas Brothers’ family of heirs to make this film? What reaction are you hoping they will have to this presentation of Fayard and Harold’s work?

The Nicholas Family have been very supportive. They allowed us in to the family archive and we’ve used some fantastic footage of Harold and Fayard as young men. We’ve shown them the film and they’ve said very nice things.

Filmmaker 5.3:  What are your own perspectives as filmmakers on the importance of Stormy Weather (1943) in film history?

It’s a wonderful film and that dance routine is still one of the greatest and most important dance scenes in the history of cinema.

Filmmaker 5.4:  How did you come to engage with French dancers Les Twins—Laurent and Larry Nicolas Bourgeois—for this project? And how did the collaboration evolve?

We came on board after they had been cast and their performance shot. Jake Navas directed that as well as the dramatized parts. We were very fortunate to be handed such beautifully shot and compelling footage.

Filmmaker 5.5:  This film is part homage, part dance history, part social commentary, part entertainment. What takeaway experience are you wanting audiences to have with the film?

If the film entertains an audience and leaves them with a newfound appreciation, or even a discovery, of the brilliance that was Fayard and Harold Nicholas, as well as Les Twins, whose dance performance for the film is just incredible, we would be very happy.