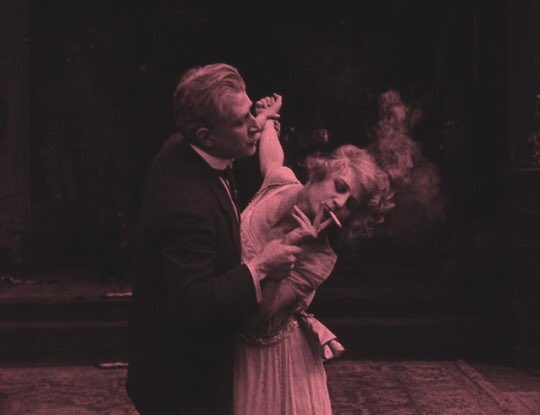 For our last Women Make Film study, Classic Couple Academy viewed La Cigarette (1919), the earliest surviving film of Germaine Dulac. La Cigarette chronicles the marriage of an older archeologist and the jealousy his much younger wife awakens in him as she seeks to entertain herself while he immerses himself in his work. Convinced of his wife’s infidelity and driven to die so he can leave her to her youth, the husband places a poisoned cigarette in the box on his desk and vows to allow chance to determine the moment of his death. A domestic farce plays out with multiple misunderstandings until the couple reconciles. Keeping viewers on edge with each cigarette smoked, La Cigarette presents the ultimate exploration of the Women Make Film: A New Road Movie Through Cinema chapter 38 content on death.

How was death explored in the film?

We’re introduced to our main character, a Parisian museum director, through the discovery of a mummy princess and its placement in the home of the couple whose marriage the film explores. The mummy as a symbol of death presides over the husband and wife relationship as they continue to misunderstand one another, putting their relationship in jeopardy. Influenced by an ancient tale, the husband orchestrates plans for his own eventual death by chance via a poisoned cigarette placed among a box of cigarettes. From that point on, as the cigarettes in the box are smoked, the viewer wonders if this one will be the fateful one. Death lurks as a constant imagined and real threat to the couple and their marriage.

Bonus: How did the Women Make Film death, endings, and song and dance chapter material influence how you watched this film?

La Cigarette explores death as an occupation through the husband as a museum curator obsessed with researching ancient tales of tragic death. In his resignation regarding his marriage, he welcomes death as a relief and a release. Throughout the film as we attempt to track the lethal cigarette, death remains a taunting menace. Ultimately, love defeats death in a surprising and uplifting ending.

Did you watch La Cigarette? Another film featured on TCM in this final episode? Share your take in the comments.