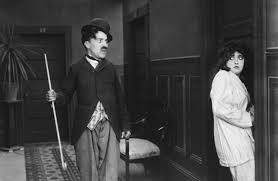 This week, Classic Couple explored the early work of Mabel Normand. A popular silent-film star in the 1910s and 1920s, Normand was a quadruple threat as actress, screenwriter, director and producer with at one time her own movie studio and production company. She was an early collaborator of Mack Sennet in his Keystone Studio films and often remembered for her collaborations with Charlie Chaplin and the 12 films in which he served as her leading man. Mabel’s Strange Predicament is a standout among their collaborations as it was for this film that Chaplin first conceived of and portrayed his most iconic character later known as The Tramp.

A silent short of only 17 minutes, Mabel’s Strange Predicament is a fitting study of early comedic techniques on film and the Women Make Film: A New Road Movie Through Cinema chapter 25 content on comedy.

What comedic techniques were used in the film to clearly distinguish it as a comedy?

Misfits. Charlie Chaplin’s portrayal of a drunk loitering in a hotel lobby is central to the film. The Drunk does not belong in the social setting and his intoxicated state drives the resulting ruckus in the film. The inebriated character, the misfit, acting out of alignment with the people and the surroundings sets up the comedic interactions and happenings throughout the film.

Sex. Chaplin’s character in the film, known simply as Drunk, first encounters Mabel and her dog in the hotel lobby. Smitten with her, he pursues her upstairs to the guest rooms only to find her locked out of her room in her pajamas – a compromising position that only entices the Drunk to pursue her further. Mabel’s attempts to foil his advances and to hide from public view further the comedy. Later, she is accused of being a seductress with again sex used as a comedic device.

Misunderstanding. Mabel hides from her drunken lothario under the bed in a room across the hall unbeknownst to the occupant, a married man waiting on his wife to rejoin him. She is discovered in the room not only by the man’s wife, but her own sweetheart. The misinterpretation of what the young woman in her nightclothes is doing in another man’s room creates quite the commotion among all parties. Classic slapstick comedy brawling ensues.

Bonus: How did the Women Make Film politics, gear change and comedy chapter material influence how you watched this film?

The sixth in the series of Mabel Normand’s “Mabel” movies, Mabel’s Strange Predicament is a tour de force of comedic techniques packed into one short film. It also offers the first glimpse into the early development of one of the greatest comedic characters in cinematic history, Charlie Chaplin’s The Tramp. Normand, an early champion of Chaplin’s career, deserves significant credit as a filmmaker for serving as one of his mentors. Equally she deserves to be remembered for her contributions to cinematic comedy.

Did you watch Mabel’s Strange Predicament? Another film featured on TCM? Share your take in the comments.