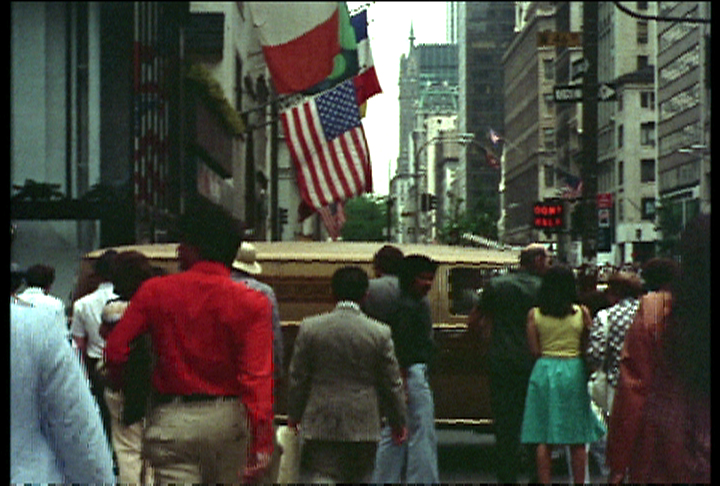 Chantal Akerman was a Belgian film director, screenwriter, artist, and film professor at the City College of New York. She was born to Holocaust survivors from Poland; her mother Natalia (Nelly), survived years at Auschwitz. Daughter Chantal and mother were extremely close with Nelly encouraging Chantal to pursue her career in film.

In 1971, Chantal Akerman moved to New York City where she remained until 1973 before returning to Belgium. During this time, she and her mother Nelly exchanged letters, which became the script for Chantal’s 1977 film News From Home.

Chantal and Nelly are never seen in News From Home. Rather, the entire film is a series of cityscapes depicting the New York City Chantal was experiencing as a young woman on her own. Filmed in Chantal’s signature style, there are long tracking shots and prolonged stills where the action comes in and out of frame. The only soundtrack is the sounds of the city streets and Chantal’s voice-over as she reads letters that her mother sent her between 1971 and 1973 during the time she lived in the city.

The news from home comes in simple letters from Nelly. They are all that is shared; we experience none of Chantal’s replies. We only know of them from Nelly’s reactions to their contents.

Engagements, marriages, births, schooling, illness, vacations, dinner parties, work. This is the news from home Nelly shares. The passage of time in family life in a series of letters.

In reply to Chantal’s notes, Nelly always expresses her delight at having received word from her daughter in the States. She pleas for pictures and makes requests for more details. She urges her to visit family in the NYC area, who are family after all. Always she implores Chantel to write more often. And she is sure to convey an open invitation to return home.

Each letter closes with an expression of love, most signed “Your loving mother.”

News From Home captures the minutia of a mother’s domestic life contrasted across the miles with the exciting life of a young daughter in New York City in the 1970s. Nelly’s news from home could well be the news from home of any mother. It is the demonstration of maternal love in the mundane. Magic.

Chantal Akerman’s News From Home (1977) airs on TCM during the TCM Classic Film Festival on Sunday, May 9 at 4:15 am, meaning the early morning hours of Monday, May 10. It is followed by the Chantal Akerman’s short film La Chambre (1972), airing at 5:55 am ET as the film closing out the TCMFF 2021 programming on TCM.