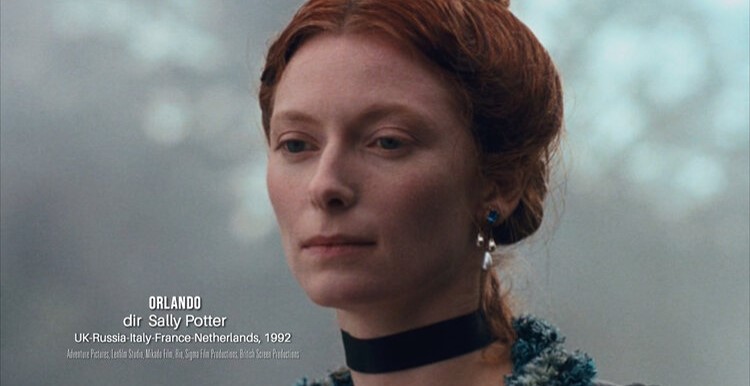 This week Classic Couple Academy traveled through time in Sally Potter’s 1992 film Orlando. Based on Virginia Woolf’s 1928 novel Orlando: A Biography, it’s the story of a young nobleman who receives the favor of Queen Elizabeth I. On her deathbed the queen bequeaths a vast estate to Orlando and his heirs with one condition – “Do not fade. Do not wither. Do not grow old.” And so he doesn’t. The film follows the life of Orlando over 325 years. With its focus on the surprising life of an immortal being, Orlando presents viewers with a study film for Women Make Film: A New Road Movie Through Cinema chapter 32 content on reveal, chapter 33 on memory and chapter 34 on time.

What was a memorable reveal in the film’s story?

The most startling reveal comes after Orlando wakes from a seven-day sleep to discover he has transformed into a woman. The transformation comes after Orlando has lived for several hundred years as a man. It results from an aftershock following the endangerment of his life as an ambassador in an Ottoman Empire battle. The next impactful reveal comes when Archduke Harry, who knew Orlando as a man, realizes that same person is now a woman.

How did a memory impact a significant character in the film?

The film closes in 1928 not long after Orlando presents a compilation of writing, that we are are assume is a memoir, to a prospective publisher. Afterwards she visits her ancestral home and tours it, viewing her own portrait when she has the nobleman of the house. The film closes as Orlando lies in repose under a tree on the estate daydreaming just as she did as a young man on the day Queen Elizabeth visited 325 years earlier. Tears described as of happiness roll down Orlando’s cheeks as she recalls her life as both woman and man.

How did the passage of time factor into the film?

The passage of time is central to the film as we follow the life of Orlando for 325 years. We experience his life as an Elizabethan nobleman falling in love, an isolated aspiring poet, and an ineffectual diplomat. As a woman Orlando lives as a lady of the court, takes a lover, loses her wealth, and gives birth. In the end, the viewer assumes Orlando’s life will continue for many years to come.

Bonus: How did the Women Make Film reveal, memory and time chapter material influence how you watched this film?

Orlando explores all of the themes presented in Women Make Film episode 12 as an exceptional example of how to intertwine reveal, memory and time.

Did you watch Orlando? Another film featured on TCM? Share your take in the comments.