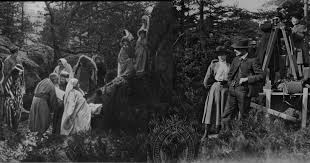 This week, Classic Couple journeyed to the very beginning of women in film to the work of Alice Guy-Blaché. A pioneer French filmmaker, Alice Guy-Blaché is considered to be the first filmmaker to systematically develop narrative filmmaking and likely the only female filmmaker in the world from 1896 to 1906.

In 1906 she directed for Gaumont Film Company, where she was head of production, The Birth, the Life and the Death of Christ. The film, which used 300 extras and elaborate sets, was for the time a big-budget production. Based on the illustrated The Life of Our Saviour Jesus Christ by James Tissot, the film consists of 25 vignettes to tell the life of Christ. Guy-Blaché employed some of the first visual special effects and directorial techniques such as panning shots and having actors walk in and out of a shot in this film. She also synchronized audio recordings to the images on screen using the Gaumont “Chronophone” system.

While the subject matter certainly fits the Women Make Film: A New Road Movie Through Cinema chapter 21 theme of religion, The Birth, the Life and the Death of Christ stands as a masterpiece of early filmmaking.

How did religion add complexity to the film or influence its characters?

The Birth, the Life and the Death of Christ is an episodic telling of sequences from the life of Christ. This early depiction on film brings Biblical story to life. Surely at the time this was quite the spectacle due to audience familiarity with the subject matter. Indeed, due to much of the content focusing on Christ’s trial, crucifixion, and resurrection, it’s like an elaborate Passion Play set to film.

Bonus: How did the Women Make Film home, religion and work chapter material influence how you watched this film?

The Birth, the Life and the Death of Christ sets the bibilical story of Christ to film. There is an intensity and a piety to the entire production. Watched through the Women Make Film lens, the early filmmaking techniques deployed are quite remarkable and enhance the viewing experience.

Did you watch The Birth, the Life and the Death of Christ? Another film featured on TCM? Share your take in the comments.