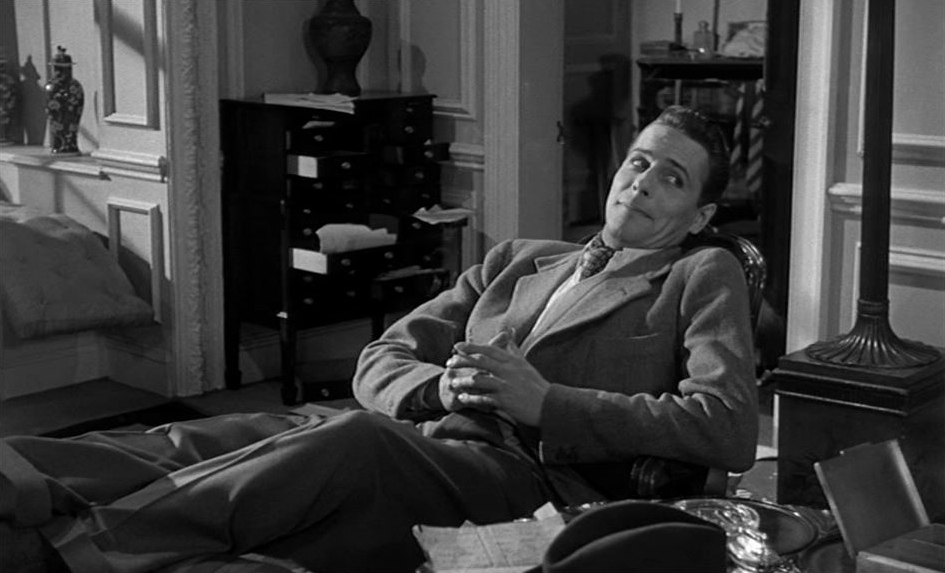 This week Classic Couple Academy watched Wendy Toye’s 1954 film The Techman Mystery. A Renaisance woman, Toye began her career as a dancer and actress, directed for the stage and for film and even wrote and produced. A true creative force, she was a child prodigy as a dancer performing at the age of four at the Royal Albert Hall and choreographing a ballet at the London Palladium at age nine. Toye’s vast stage experience served her as director of The Teckman Mystery, the story of a novelist asked to write the biography of a test pilot who died while flying an experimental plane. The film centers on author Philip Chance as he gets drawn into the mystery surrounding the pilot Martin Teckman’s disappearance and the subsequent deaths of people connected with him. Much of the film presents like a stage play with most of the action taking place as interaction between characters in author Chance’s apartment and the apartment of Teckman’s sister Helen. The reveals come in these close settings centering on dialogue like in a play. As a murder mystery, The Teckman Mystery makes a good study film for Women Make Film: A New Road Movie Through Cinema chapter 29 content on tension and chapter 31 on leave out.

How was tension used to further the film’s story?

All mysteries rely on tension – where, when and how something happened – as the main driver of the story. The Teckman Mystery explores the tension of an event that has already happened, the disappearance and reported death of pilot Martin Teckman. As the story unfolds, the tension compounds in accusations, distrust and deceptions between characters. In true mystery form, a final tense confrontation reveals the true killer and mastermind behind it all.

How did the filmmaker use leave out in the film?

The Teckman Mystery employs the classic mystery technique of having all of the disappearances, all of the murders, happen unwitnessed by the audience. The film centers on the ultimate leave out – the death of the title character having already occurred at the outset. The subsequent deaths of those who knew him happen off-screen with the viewer only discovering the circumstances afterwards. Viewers never actually witness a complete murder scene; the details of who the murderer are left out until the final reveal.

Bonus: How did the Women Make Film tension, stasis and leave out chapter material influence how you watched this film?

Reflecting on the Women Make Film content on tension and leave out greatly enhanced the viewing experience of The Teckman Mystery. These two techniques are mystery mainstays that should be familiar to all lovers of a good whodunit.

Did you watch The Teckman Mystery? Another film featured on TCM? Share your take in the comments.