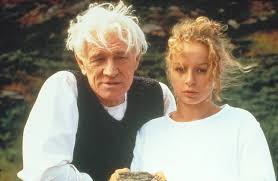 This week Classic Couple Academy traveled to Ireland for This is the Sea (1997), a romance written and directed by Mary McGuckian. The story echoes that of Romeo and Juliet, focusing on two young lovers, one Protestant one Catholic in Northern Ireland during “The Troubles,” a 30-year period of conflict between unionists and nationalists. At its core a love story, This is the Sea makes an interesting study for the Women Make Film: A New Road Movie Through Cinema chapter 37 content on love.

How did love play out in the film?

Young Hazel, a Protestant, is taken under the wing of a meddling neighbor eager to see her enjoy her youth. Her neighbor, Old Man Jacobs, takes her to a farm show where he encourages her to acquiesce to the attentions of a young Catholic lad working there named Malachy. Hazel and Malachy quickly fall in love and their romance is encouraged by all around them, despite their different backgrounds.

Old Man Jacobs plays middle man arranging their meetings and Hazel’s brother Jef covers for her with their domineering mother. Malachy’s older brother, Padhar, encourages his younger brother to pursue Hazel and their clandestine relationship. Everyone around the two young lovers appears to support them.

In a climactic turn of events, it’s revealed that Hazel and Malachy have been pawns in a drama far bigger than themselves. In the end, they must choose their love for one another over all.

Bonus: How did the Women Make Film life inside, the meaning of life and love chapter material influence how you watched this film?

This is the Sea is a complicated exploration of love. While the love of Hazel and Malachy is at the film’s center, so to is the love of family and the love of a cause. Love in the film disappoints, manipulates, abuses, dominates, and destroys just as it thrills, excites, delights, comforts, and consoles.

Did you watch This is the Sea? Another film featured on TCM? Share your take in the comments.