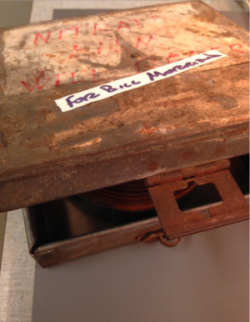 Filmmaker 5.1: What aspects of Liebeshölle/Pawns of Passion (Germany, 1928)—the source material for this film—inspired you to create “let me come in?”

I like how the meaning of “let me come in” changes over the course of the short scenario.

The scene is from Reel 3 of “Pawns of Passion”, when the woman, played by Olga Tschechowa, is being rescued by the artist, played by Hans Stüwe. She is in a fog, barely conscious, and he helps her up the stairs to his room, and then into his bed. In the original he has just saved her from drowning herself in the Seine. But without this backstory, it is not clear what his intentions are. Is he taking advantage of a drunk or drugged woman? Is she begging, “let me come in”, or is he? On top of this, of course, is the fact that the condition of the film is severely distorted and seems to reflect her state of mind. It deteriorates progressively as she is put to bed and he tends to her. We then see her somewhat restored, and he urges her to dance with him, and as they embrace, their heads seem to melt together in the deteriorated emulsion. “Let me come in” seems to be a mutual plea from two lovers seeking solace in one another. In the final act, it is not clear whether this dance was a dream of hers, or a fantasy of his. And finally, we see her fully composed, downstairs, waiting for her lover to finally come home.

Filmmaker 5.2: What insights can you provide about your creative process in working with your collaborators—composer David Lang, soprano Angel Blue and film historians and preservationists George Willeman and Bruce Lawton—on “let me come in?”

I have a twenty-year friendship and collaborative history with David. This is our eighth project together. We have worked on many different types of projects, including song cycles that featured short films I made (Shelter, BAM, 2005), operas where I designed videos as part of the set (The Difficulty of Crossing a Field, Kasser Theater, 2006; and Anatomy Theater, LA Opera, 2016), films of mine where I used his pre-recorded music as the track (Back to the Soil, 2014), and films of mine for which he composed an original score (The Village Detective: a song cycle, 2021). I have also made films to accompany his compositions before as with “how to pray” (2005), and “let me come in” most resembles that working process, where David gave me a master recording, which in turn inspired me to match some obscure ancient images to his music. I would say that in this case, Angel Blue’s interpretation of David’s words and music reminded me of this scene from “Pawns of Passion” and inspired me to seek it out and use it.

I have a similarly lengthy working relationship with George Willeman, the nitrate vault manager at the Library of Congress Audio Visual Conservation Center in Culpeper, Virginia, who is truly a collaborator. He calls himself my enabler. George will discard deteriorated nitrate prints that no longer have any archival value, and sometimes he will save one to see if I want it before throwing it away. Such was the case with “Pawns of Passion” which was one in a trove of nitrate films that was rescued from a barn in Pennsylvania and donated to the Library by the film preservationist Bruce Lawton. I have never met Bruce, but I know him by reputation, and I am deeply appreciative of his work.

Filmmaker 5.3: What would you like classic film fans to take away from their “let me come in” viewing experience in this broadcast premiere?

Well, I don’t like to telegraph my intentions, or predict how any given audience member will experience a film. Some people may find it fascinating, beautiful, sad, romantic, and mysterious. Others may find it inscrutable, hard to look at, or a waste of time. The TCM Film Festival has invited me to present my work three times in the past, so hopefully with this fourth one some people will be somewhat prepared. But for the uninitiated, I hope they think about film as a living, dying, shape-shifting object, that contains stories and dreams, just like we do.

Filmmaker 5.4: What unique place does “let me come in” hold in the Bill Morrison filmography canon and the future vision for your work?

It was a thrill for me to collaborate again with my old friend David Lang, one of our greatest composers. And for me to be introduced to Angel Blue’s voice, which is absolutely transcendent. I am happy this piece will live on as one of LA Opera’s Digital Shorts and may one day remind us all of this crazy pandemic time from 2020-21.

Filmmaker 5.5: What is your perspective on how films from the past can inform storytellers of today?

Well of course old films have always served as source material for newer ones. What fascinates me in particular is how an odd piece of celluloid, a specific print, can pass through the 20th century, and then what becomes of it in the 21st century? It’s like seeing an old traveler whose skin tells the story of their travels.

An experimental short produced and directed by filmmaker Bill Morrison, “let me come in” features resurrected footage from what may be the last surviving reels of the 1928 German silent romance Pawns of Passion. Co-presented by Los Angeles Opera, the film features words and music from Pulitzer Prize-winning composer David Lang performed by soprano Angel Blue. Special thanks go to the Library of Congress National Audio-Visual Conservation Center for providing the decaying nitrate film of Pawns of Passion to Bill Morrison.

Bill Morrison makes films that reframe long-forgotten moving images. A prolific filmmaker, “let me come in” (2021) is his 41st film. Bill Morrison’s films have premiered at the New York, Rotterdam, Sundance, and Venice film festivals. In 2014 Morrison had a mid-career retrospective at MoMA. His found footage opus Decasia (2002) was the first film of the 21st century to be selected to the Library of Congress’ National Film Registry. The Great Flood (2013), was recognized with the Smithsonian Ingenuity Award of 2014 for historical scholarship. Dawson City: Frozen Time (2016) was included on over 100 critics’ lists of the best films of the year, and on numerous lists ranking the best films of the decade, including those of the Associated Press, Los Angeles Times, and Vanity Fair.

2 thoughts on “Filmmaker 5 with Bill Morrison”