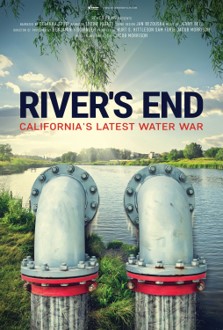 On November 2, River’s End, the feature directorial debut from filmmaker Jacob Morrison, will be available on video on demand (VOD) on all major platforms in the U.S., Canada, and U.K. River’s End explores the global water crisis, using the state of California as a microcosm. It reveals how water politics that led to the draining of the Owens Valley by Los Angeles, made famous by the 1974 film Chinatown, continues to this day in ongoing efforts to take ever more water from Northern California’s San Francisco Bay estuary. Flash forward from the 1970s to today where the water grab is at the hands of industrial agriculture and its powerful corporate investors. River’s End inspires viewers to learn where their water comes from in an effort to save our rivers and the ecosystems and communities that depend upon them. In anticipation of the River’s End release, Classic Couple Academy recently asked Jacob Morrison about the project and resulting 81-minute documentary. Our Filmmaker 5 with Jacob Morrison follows.

Filmmaker 5.1: River’s End is your directorial debut. What inspired you to tell this story?

The initial idea came to me when I was in film school at USC. This was during the height of the last drought, and my cousin producer Sam Furie and I were looking for a project to work on together. We were really interested in stories about the ongoing drought, particularly from journalists like Mark Arax, who described the great inequities of freshwater resources in the Central Valley. Small towns were seeing their wells go dry as neighboring farms drilled deeper wells, draining local aquifers.

I took out a camera and began a journey of discovery—one much longer and more difficult than I had ever imagined. The more I learned, the clearer it became that I was making a feature film. And so it took producer Kurt Kittleson, whom I met after graduating film school, to provide the means, encouragement, and wisdom necessary to finish River’s End.

Chinatown is an extraordinary film in terms of its craft and storytelling, and in its capturing of the mythos surrounding California water. Robert Towne, the screenwriter behind Chinatown, actually stumbled on the Owens Valley tragedy while reading Carey McWilliams’ classic book, Southern California: An Island on the Land. Both works emphasize the greed and corruption Los Angeles partook in during its infamous water grab, and the ruin LA inflicted upon Owens Valley farmers. Both works were deeply influential to me. This theme of taking water from one place, and largely destroying that place in order to benefit the area where the water is being diverted, is the throughline in River’s End.  However, the narrative continues today on a much more epic scale, as the entirety of Southern California, and large agricultural corporations, seek more water.

Filmmaker 5.3: What were your biggest challenges in making this film?

You really could not imagine a more “independent” film. The production team typically consisted only of myself and my cinematographer and friend Benjamin Fischinger. We traveled up and down the Golden State more times than I could possibly recount to capture all of the footage and interviews you see in the film. We did all this with the hope that I could one day finish it and get it released!

I edited the film myself. I collaborated with one sound designer, one composer/musician, one animator… you get the idea. We had to hide this fact in our work, so that the audience would always feel they were in capable hands. This was also both my and my producer Sam Furie’s first film, so every step had a steep learning curve. Against the odds, we made the film we set out to make, and I am so excited for audiences to see it.

Filmmaker 5.4: What do you want audiences to take away from experiencing River’s End—especially those who question watching a film about a “California problem?”

River’s End is an in-depth look at the frontlines of our global water crisis. Water issues are not a California problem, as you will see in the movie. Climate change is making dry places drier, and freshwater-related conflicts are among the top national and global security risks. The issue is, if California can’t solve its water crisis, how can other places without California’s resources solve theirs? By looking deeply at one watershed, we can find themes and solutions that I believe are relevant everywhere.

Filmmaker 5.5: You offer resources and educational offerings to complement this film. Was that always a component of your vision for River’s End?

It is hard to remember, but in making this film, I quickly realized that water issues would only get worse until more people learned where their water comes from. You really can’t expect people or politicians to take action if there isn’t that bare-minimum level of interest. Water doesn’t magically come from the tap, and our water use has a huge impact on people, industries, and ecosystems. I hope audiences will visit our website, www.riversendfilm.com/resources, learn where their water comes from, and be part of a sustainable water future.

Watch the River’s End trailer and connect with the film on social media by searching: RiversEndFilm.

1 thought on “Filmmaker 5 with Jacob Morrison”