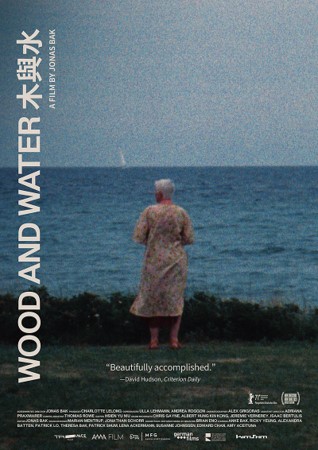 Inspired by his own experience of living far from all that was familiar, German director Jonas Bak brings his close relationship with his mother to film in Wood and Water. A story of navigating ageing and being at peace with the past while living in the present, Bak’s filmmaking moves from the tall spires of the Black Forest to the teeming skyscrapers of Hong Kong in this tranquil, deeply moving film. Wood and Water stars Bak’s newly retired mother Anke, as she travels to Hong Kong to spend time with her grown son Max, who eludes communication with the family. Her journey to rediscover Max becomes one of her own self-discovery as she navigates a foreign city and new chapter in her life.

Wood and Water will be released theatrically in New York (MOMA) on March 24 with a Los Angeles and national release to follow. Classic Couple Academy interviewed Jonas Bak about his experience capturing such a personal story in his first feature film.

Filmmaker 5.1: You filmed your own mother as the central character for this story. How did you separate son and filmmaker for this project—or did you?

It was hard to separate son and filmmaker. On the one hand, much of Max’s life and story is invented. But it also helped to have my mother imagine Max as me, to guide her acting. And if I wasn’t her son she would have never have embarked on a project like this.

Filmmaker 5.2: You show distance through many different techniques in this film. How did these techniques serve you in conveying emotion in the film?

It’s hard to show distance and thus this makes you feel distance in a film. You can only show the consequences of distance, that was my goal – remnants of what once was, broken phone conversations, washed out sound design that mimic memories that have been washed away, and above all (in the first part of the film), stagnation.

Filmmaker 5.3: Wood and Water is many things—a travelogue, road movie, story about aging, family drama, fish-out-of-water tale, account of a prodigal son. As a filmmaker, how did you approach blending and anchoring these stories?

As a filmmaker the most important question was why use the medium of film to tell a certain story. And in all the possible perspectives you mention, I liked that there is a contrast between stagnation and movement and the importance of place. I think those two aspects can be beautifully explored through cinematic language.

Filmmaker 5.4: You contrast rural and urban life in the film and yet the pace in both settings is deliberate and slow. What do you hope audiences will discover in the juxtaposition of country vs. city?

In the juxtaposition, audiences might discover that the city is also a place of opportunity, with many layers to it. Hong Kong is bustling and busy, but it also has a layer of calm and spirituality. I imagined the mother would discover that for herself and at her own pace, which is in turn reflected in the pacing of the film.

Filmmaker 5.5: In the film, your mother Anke begins a new chapter of her life as a recent retiree. Did making this film begin or close any chapters for you or your family

It was a “rehearsal” for my mother’s real retirement, a year later. The film gave her the chance to explore entering this new chapter of her life. It closed my chapter of living in Hong Kong. I then went back to Germany, bringing us closer again. But the film marks more of a turning point for me than for her. Contrary to the character she plays, my mother was looking forward to retirement and is enjoying it now.

Watch the Wood and Water Trailer