Filmmaker 5 with Mat Sheldon: The Electricity in Me 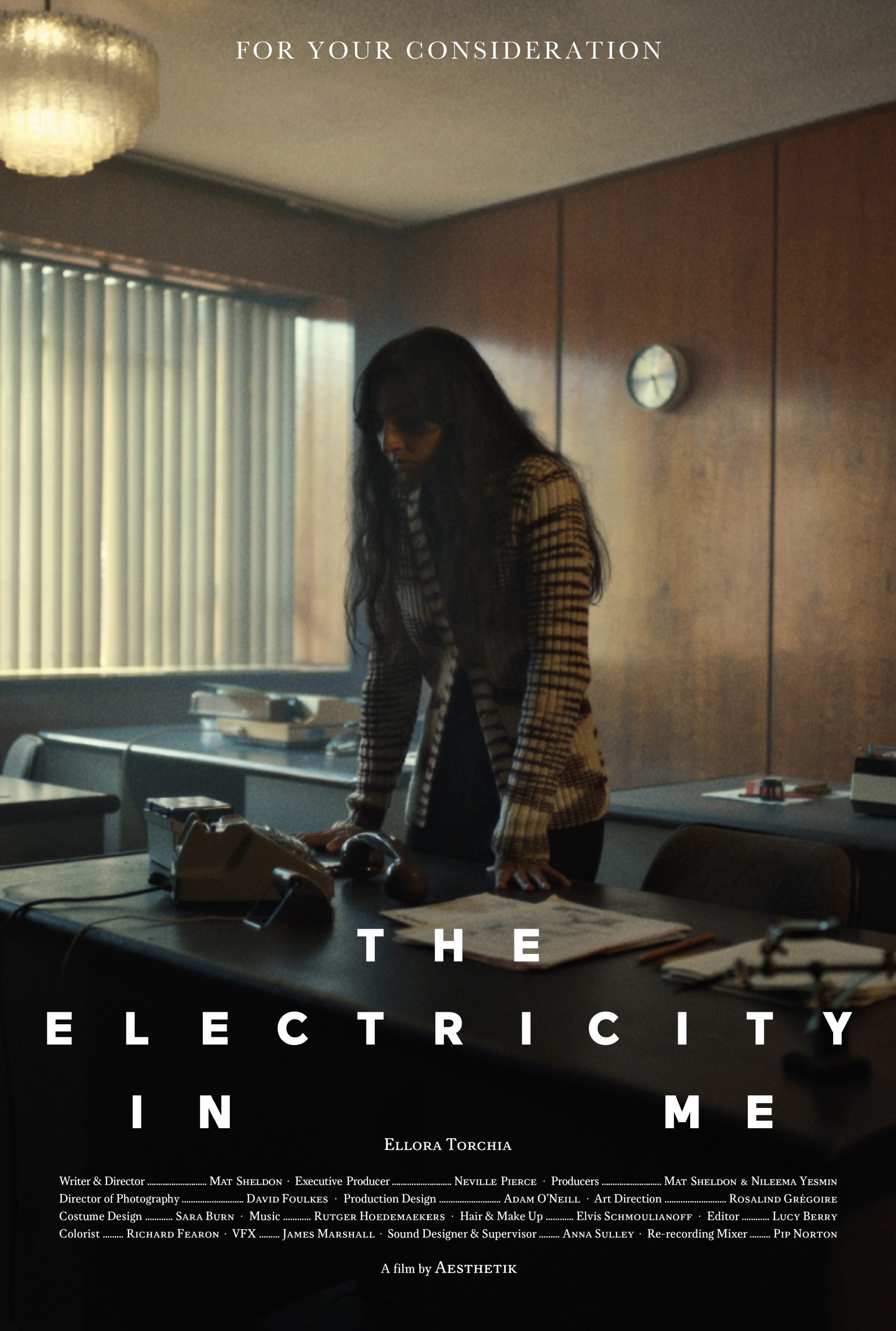 In his first-person confessional short film The Electricity in Me, filmmaker Mat Sheldon shares the story of his birth mother Joan. Pregnant by her 50-year-old university professor, Joan gave her son Mat up for adoption, afterwards moving to England to forge a new life as a secretary for the University of London. Returning to visit family in rural Saskatchewan only occasionally, she died of metastatic breast cancer in 1987, leaving behind her diaries and letters.

Mat gleaned from Joan’s personal papers a portrait of a woman who never stopped loving him as the son she gave up for adoption. Joan is brought to life by 2021 BAFTA Breakthrough, BIFA nominated, and Screen International Star of Tomorrow actor Ellora Torchia. Her powerful, one-take monologue performance lays bare the profound grief in Joan’s diaries, while illuminating a family tie that could not be broken.

Our Classic Couple Academy interview with The Electricity In Me writer and director Mat Sheldon follows.

Filmmaker 5.1:  How did you come to work with Ellora Torchia for the lead role in this film? How did you two collaborate to evoke the emotion behind your mother’s words?

It was a dream of dreams to ask Ellora to play this role. I had been tracking her for a while and then to meet her through a mutual friend and talk about making a film about Joan, my Canadian birth mother, was such an important moment for me. In that meeting, Ellora read an early draft of dialogue right there in front of me, which was terrifying. After talking for maybe another twenty minutes, she said yes to making the film. It is still incredible to me that she would be so clear and decisive about committing to a story that I was still figuring out how to tell.

The collaboration with Ellora was a very real, creative partnership. It was talking about who Joan was, reflecting on the tone of her writing which is very specific and direct in its style and extremely honest about everyone Joan lived, loved and worked with. But I do feel that building a truly three dimensional character is still a mystical process to me. How do you become someone else? How can you know how someone would react to every part of life? Which brings me back to how skilled Ellora is an actor and how open she was to bring her own sensibility and perfect instincts to create Joan. There’s a quiet resilience and a yearning for a fulfilled life in that performance that Ellora brings that is very special, I think.

Filmmaker 5.2:  The settings of this film stand in stark contrast to the emotional content delivered in monologue. Why these storytelling locations?

We shot in Canada, on the Saskatchewan prairies where Joan grew up and where she was laid to rest because I strongly believe in being in the real places which echo with the people that were there, inhabiting them, living their lives. And, I’d actually say the Canada landscapes are sacred to me because of their connection with Joan. Joan would have seen those flat plains as she left Canada pregnant perhaps knowing she wouldn’t return for a long time.

Filmmaker 5.3:  The family themes of dark secrets, pain, shame, loss, resentment, hate, grief, redemption, forgiveness, understanding, connection, and love are all explored in The Electricity in Me. How did you wrestle with so much depth of emotional content to ultimately pour into a short film?

On one level, if I think about it too long, I get stuck trying to connect the different layers to my birth mother’s story which feel conflicted and contradictory. On one level, she was extremely brave whilst dealing with a life event that changed her fundamentally. And she appears happy with life, externally – but her internal life seems less clear. Her diaries are testament to how much she loved her son – it’s a strange complicated thrill to see my name written by her, decades ago. But the adoption doesn’t dominate her writing as she talks about a thousand other details, most of them spinning out of her relationships with the people she was closest to.

Internally, I think I had been researching and writing the story subconsciously without even being aware that it was there because when it came to sitting in front of a blank page, the words seemed to pour out of me and whilst I had to work at it, as always, I only wrote three drafts. It has never been like that before or since.

Filmmaker 5.4:  You bookend the film with a letter and a diary entry. How did you parse the source material—your mother’s own diaries—to arrive at this story? And why share those passages?

The diary and letter quoted elements were something that I struggled with. Our wonderful editor Lucy Berry was extremely patient with working through these options which were almost infinite since I have about five years worth of Joan’s diaries and about twenty letters to choose from.

The opening statement – “It is so strange he looks like me, I had so thoroughly renounced all claim to him” – was selected on the very last day of the edit. It was from a letter from Joan to the adoption agency in 1979 and felt like a perfect introduction to her complex relationship with the truth of what happened to her and her ongoing loss which never really healed.

The closing words – “I said to Melvin that it was his birthday today and said I would like to see him but didn’t feel desperate about it anymore” – are special to me. They were written on my birthday on 15 December 1986 when Joan was dying of cancer in University College Hospital in London and say to me that never forgot me.

Filmmaker 5.5:  This is a deeply personal story to tell. What compelled you to tell it and in this way? What do you most want audiences to take away from viewing The Electricity in Me?

I wanted to present the audience with a clear window into someone who lived a hidden life. One reviewer has said it feels like she’s talking to a colleague in that 1970s office painstakingly created by Production Designer Adam O’Neill and Art Director Rosalind Grégoire. I love that because it means it feels what Ellora is doing is personal. Immediate. That there’s a connection there.

A number of people have also said that the running time feels shorter than it is, which is very satisfying because when a film is properly working, it’s like dreaming, and the passing of time isn’t something that imposes itself on your consciousness. You’re entranced because you give yourself over to it. For people to come away from viewing the film and say they know Joan and drawn to her story is enough for me. Creating visceral moments and characters that people want to spend time with and make that investment in is what we strive for, isn’t it, as filmmakers?

Watch the The Electricity In Me trailer.