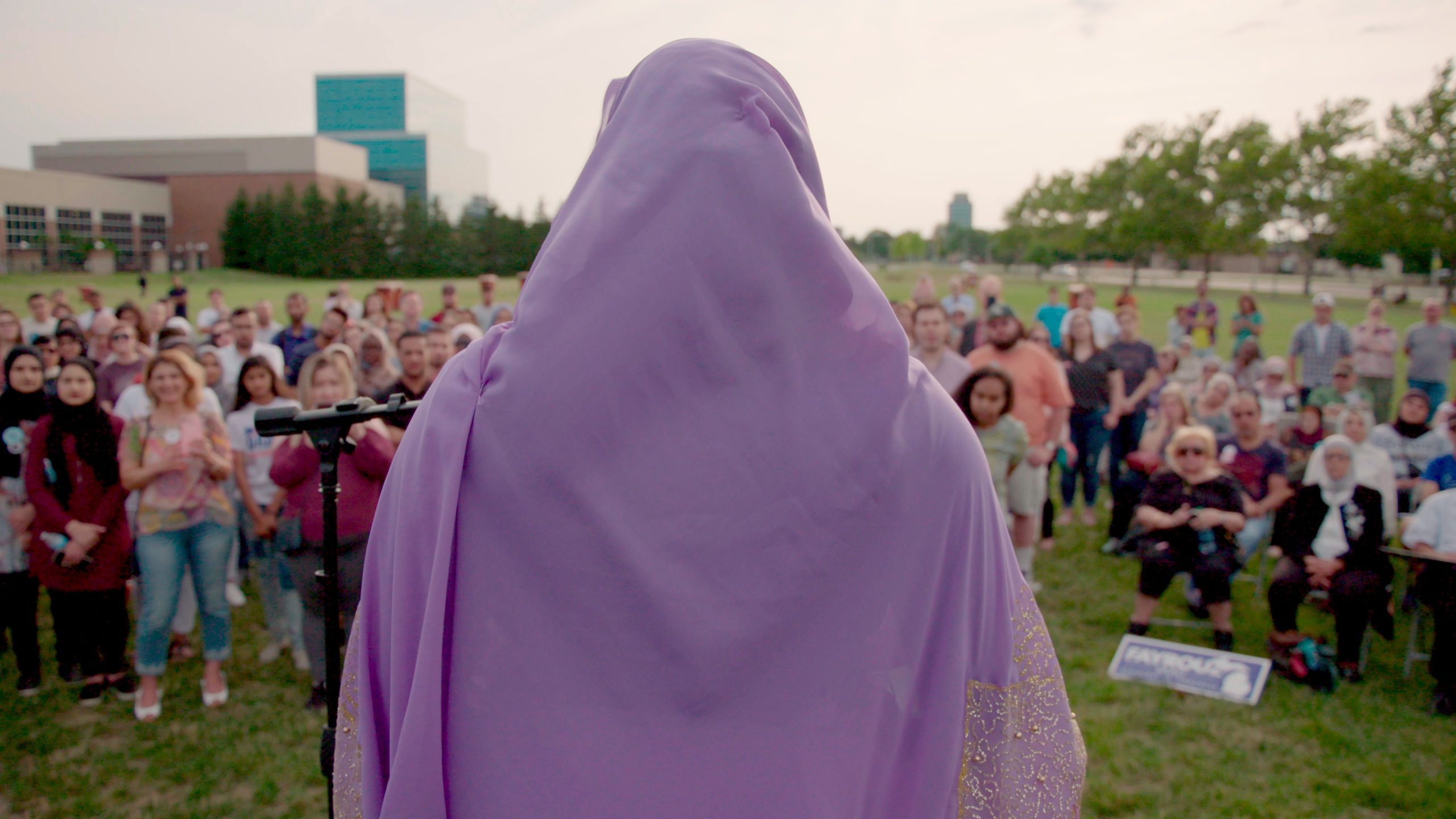 An Act of Worship from filmmaker Nausheen Dadabhoy has been described as a polyphonic portrait of the last 30 years of Muslim life in America. Through the lens of pivotal moments in U.S. history intersecting with anti-Muslim rhetoric and policy, the film tells the story of three young Muslim women who came of age after 9/11. With first-hand knowledge and intimate access to the Muslim community, Dadabhoy and her filmmaking team weave together footage of the women with home videos and recollections from community individuals impacted by incidents of Islamophobia. An Act of Worship offers seldom seen insights into the experience of Muslim Americans through shared experience and memory.

Nausheen Dadabhoy’s work as a director and cinematographer spans fiction and documentary. She lensed an Oscar-nominated film, an Emmy-winning documentary, and films that have played at Sundance, TIFF, Locarno and on Al Jazeera, HBO and PBS. An Act of Worship makes it world premiere on Thursday, June 9 at 5:00 PM at Village East in New York City as part of the 2022 Tribeca Festival.

Our filmmaker 5 with Nausheen Dadabhoy discussing An Act of Worship follows.

Filmmaker 5.1:  You use pivotal moments across the past 30+ years—interspersing news footage with family home movies—to tell a story of Muslim life in America. What was your biggest challenge in selecting footage to use?

From a story standpoint, this was really challenging, because people record home videos to capture happy moments, but we often needed to create a different mood within these segments that highlighted tension or stress that was going on at that particular time period. The home video footage also spans three decades, but we had some decades where there was so much footage, and honestly that was easier, because we had a wealth of material to choose from and could find the clips that worked best. Other decades we had every little material, and that was difficult, because you’re shuffling around the same few clips trying to get them to feel right. I also want to point out that the home videos were selected after we had edited the voice over for each segment and the voice-over was driving the images we chose. We had almost 70 hours of interviews from different people across the U.S., so in some respects choosing the voice-over was the hardest part!

Filmmaker 5.2:   An Act of Worship is in many ways a coming-of-age story of three young women. What inspired you to tell these three stories?

The first six months of production was development. We traveled across the U.S. meeting different community leaders and organizers. We wanted to understand what issues different communities were challenged by, and who was leading the charge around them. Overwhelmingly we found young women at the center of these movements.

I think the coming-of-age aspect of the story is not just about these young women, but the last few years has felt like a coming-of-age moment for Muslim communities in the U.S. When we were in development and met people from so many different communities, it felt like our community was changing. After 9/11 we had people like my parents who told my sisters and I to hide that were were Muslim, because they were so afraid. In 2016 our community was shifting; they had spent that last 15 years creating organizational and community power, and it was a moment when they were not going to be afraid anymore, or hide who they were. This was a moment when the community proclaimed their Muslim identity loudly and proudly, and resisted efforts to further marginalize them. We knew we had to capture the young women leading the charge.

Filmmaker 5.3:  There are themes of separation and of unity in the film. How did you use the concepts of being separate from others and of being in community with others to inform your storytelling in the film?

The film is told very much through the lens of the first generation Muslim American experience. It is framed as the story of people like me whose parents immigrated here in the 60s, 70s and 80s, because the Immigration and Naturalization Act was passed into law thanks to the civil rights movement. It abolished a race-based quota system that allowed people like my parents to immigrate to the United States.

I know from my parents’ experience that they didn’t immigrate because they wanted to, but immigration for people of that generation was necessary, due to economic, social or political upheaval as a result of centuries of colonization in our homelands.

In that way, I think that our story in the United States is one about separation. You are separated at birth from your family and community. My sisters and I were fortunate that we were able to visit Pakistan frequently as children, but even in the course of many summers, our lives with our family in Pakistan could never be intertwined as it was with the Muslim community my parents built around us in the U.S.

The Muslim diaspora community is really unique. It’s a community in some ways that is formed out of necessity, because it also a very diverse community of people from so many different backgrounds who are coming together, and creating community due to a shared religious identity. A lot of the film for me was an exploration in where, how and why our communities in the U.S. find common ground with one another and how that has shaped our story in the U.S. Unfortunately, I do feel that a lot of the bond in the community is rooted in shared trauma especially after 9/11. I think that marked a turning point for a lot of people who started to identify, perhaps not with their parents’ homeland necessarily, but as Muslim-Americans. In some ways our film is following the trajectory of that change and journey.

Filmmaker 5.4:  How was making this film a personal journey for you?

There is a woman in our film who recounts a story of being bullied in school during the First Gulf War. That woman is my sister Fatima, and she’s relating a story of something that happened to both of us. That incident of being bullied in school when I was eight, impacted how I connected (or didn’t) with my identity and religion. After 9/11 I really wanted to work on projects that would help people outside my experience understand who I was and who Muslims in America were.

Making this film, connecting with other Muslims across the country, sharing my experiences with them over the course of creating this film really helped me deepen my connection with my community and identity. It also helped me understand what I wanted as a filmmaker. I realize now that I want to focus on stories that are about looking inward rather than a reflection outward, trying to make my story digestible or palatable to broad audiences.

Filmmaker 5.5:  What do you want audiences to take away from experiencing An Act of Worship?

I made this film for primarily a Muslim audience. As a Muslim American, I can think of a handful of times that I felt seen in popular culture, like when I read a Ms. Marvel comic for the first time or watched the opening scene in Riz Ahmed’s The Long Goodbye—and it’s often been by other Muslim storytellers. I really wanted our communities to watch this and see their lived experience reflected back to them.

Audience engagement has also been a priority for me and our team since we started this project. During the last five years that we were in production, we came to realize that there is unacknowledged trauma in our communities. People we spoke to didn’t feel that incidents of Islamophobia that they encountered were very harmful, so they pushed them away and never processed them. During interviews, some of these incidents would resurface and interviewees would discuss them and often it made people breakdown and cry, but it also allowed them to recognize their trauma. We hope that the film and post-screening discussions will facilitate some of these moments of acknowledgement for our audience members to begin healing.

See An Act of Worship during the 2022 Tribeca Festival. Showings below.

1 thought on “Filmmaker 5 with Nausheen Dadabhoy: An Act of Worship”