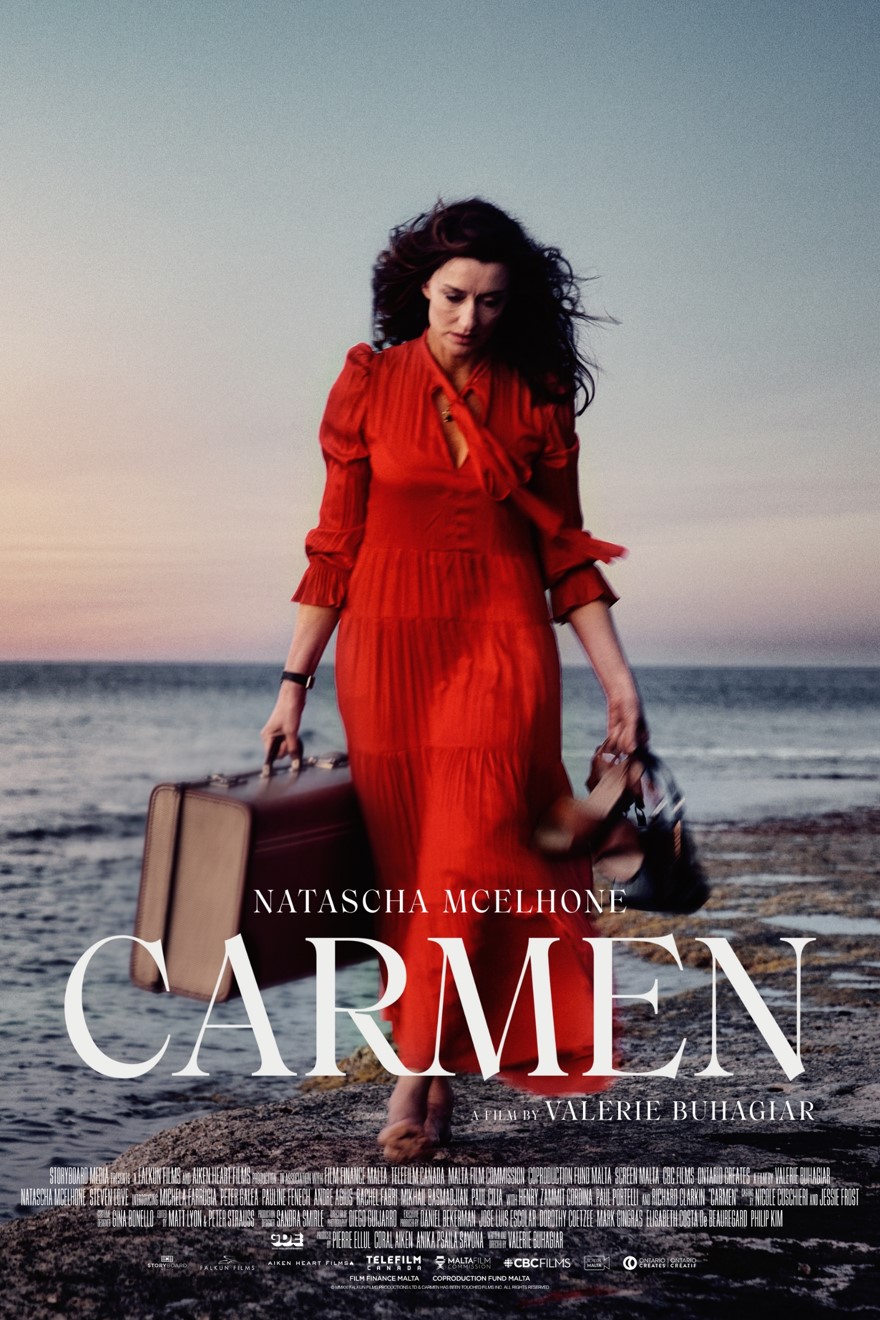 In accordance with Maltese tradition, when a young man became a priest, his eldest sister followed him to the rectory and became his maid. She received no education or salary and had no family of her own—spending her life in servitude and spinsterhood. Inspired by true events, Carmen follows the story of one such woman in a village in the Mediterranean island Malta. Carmen, played by Natascha McElhone, has looked after her brother, the priest at the local church, since she was sixteen years old. Now almost fifty, she is suddenly left to start a new life. Facing her past and forging a future, Carmen brings color to the lives of the villagers in this compelling story about a woman finding her voice.

Carmen will be released in the U.S. theatrically in major cities and on VOD in the U.S. and Canada on Friday, September 23. Our Filmmaker 5 with writer-director Valerie Buhagiar follows.

Filmmaker 5.1: You have a family connection to this story. What is it and how important was it for you to give Carmen a certain outcome?

There was a tradition in Malta that when a man became a priest his sister would go with him and be his maid. She would not get an education, a salary or have a family of her own. My Aunt Rita did this at the age of 13.

I gave Carmen the outcome that I wished my aunt Rita had.

Filmmaker 5.2:  This story is deeply rooted in the traditions of place. During production, how did you weave the film locations in Malta into your storytelling?

The story is set in the ‘80s in Malta. Malta today is very developed. We chose to shoot in Malta’s sister island, Gozo. It’s not yet developed. Malta is 122 sq. km and has 365 churches. Finding the necessary churches, bell towers etc. was easy.

Carmen struts with confidence once she finds her voice and uses it. This happens in the confessional booth. This is when the setting gets expanded and we take her to the capital city, Valetta. As Carmen expands so does her environment. But her longing for her lost lover is one by the sea. This is her sanctuary.

Filmmaker 5.3:  You producing team all have either connection to Malta or Canada, and you are Maltese-Canadian. How did this shared cultural understanding inform your collaboration on the film?

I first hooked up with Coral Aiken, the Canadian producer. She helped nurture the script. We then travelled to find producing partners, Pierre Ellul and Anika Psaila Savona. The script did not change much after their involvement. They helped bring in a fantastic crew, cast and find the perfect locations. Being a Maltese story the Maltese producers helped with the authenticity of the piece and the Canadian producer helped make it accessible worldwide.

Filmmaker 5.4:  How did you work with Natascha McElhone as lead actress to convey Carmen’s inner life, especially when she is on her own and the sole focus of the scene?

I’m an actor as well so understanding the actor’s process and journey is easy for me.

I told Natascha that my main concerns was that she’s too beautiful for the role. How do I make someone so beautiful invisible to the village? We talked about a caved in solar plexus, the shuffling of her feet and her vocal arch. It was a wonderful collaboration celebrating a transformation, a new life.

Filmmaker 5.5:  This is a film of what ifs. One of the most intriguing is: what if a woman were the local priest and in the role of trusted spiritual advisor for the community. How important was exploring this theme in the film?

The matriarch in any village or home usually is insightful and knows how to guide the flock.

I grew up going to the confessional booth every week. I lied about my sins so I’d have something to say and yet give none of my “sins” away. Why would I trust this man in the tiny booth who has never experienced much else but the church? But if it were a woman, a non-judgmental woman with deep understanding, I’d tell her all. Let’s face it, most women have stronger feelers and therefore can guide us into the right direction. 🙂