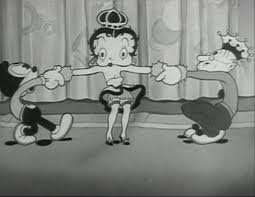 Betty Boop’s best appearances are considered to be in her first three years—from 1932 to 1934. In the cartoons of this period, she is truly the “Jazz Baby”—a young flapper embodying an innocent sexuality. The Betty Boop cartoons of this period, most no more than eight minutes in length, were created for an adult audience. The plots of the cartoons were wide-ranging, employing a variety of cartoon styles, technology and artistry developed by the Fleischer brothers and their team of animators working at Fleischer Studios.

In his autobiography, Fleischer Studios animator James Shamus Culhane recalls that Betty Boop was “an instant hit.” He credits animator Grim Natwick’s talent for animation and skill in drawing the female figure with making Betty Boop “an alluring little sexpot,” whose provocativeness continued to grow in the early cartoons.

Culhane notes, “Unfortunately, the story department was never sophisticated enough to take full advantage of Betty.” He recalls the studio operated on the “flawed concept that action was more important motivation.” The scripts he says, “were like Vaudeville skits, sometimes veering dangerously towards burlesque.”

Betty’s first appearance as a human in a cartoon in 1932’s Any Rags It is quite the introduction to the ditzy and dishy Betty Boop. Her character is the headliner with Bimbo and Koko in supporting roles in the cartoon directed by Dave Fleischer. Any Rags features the dog Bimbo as a “rag man”—also known as a junk or garbage man. As Betty leans out the window to heed the garbage man’s call for rags, the top of her dress slides down multiple times revealing her strapless bra. This first Betty Boop cartoon makes it clear that audiences should expect Betty Boop to be an innocent character, but one with a lot of sex appeal.

In Vaudeville performance, a vamp was a short introductory musical passage often repeated several times between verses. Betty’s “boop-oop-a-doop” was a vamp. “Boop-oop-a-doop” is a nonsensical phrase often used in some variation in scat music to substitute for a phrase or term one might not use in polite society. In the Betty Boop cartoons, it is used as code for her virginity.

A vamp is also known as a woman who uses her charm or wiles to seduce and exploit men. Betty as performer was a vamp with a twist. While she certainly attracted male attention, time and again it was unwanted. Her catch phrase—”boop-oop-a-doop”—was code for her virtue, which certainly seduced the opposite sex, but always at Betty’s peril.

The early cartoons time and again put Betty Boop in sexual situations where she is the object of male desire. With her baby face and curvy figure packaged in provocative dress, she projects childlike innocence while being a sexy tease. She is constantly ogled by men, whether as a stage performer or on the street. Over and again, she finds herself in compromising positions, nearly escaping situations where her virtue—her “boop-oop-a-doop”—would be compromised.

Throughout the early cartoons, Betty does not have a love interest. Instead, the Betty Boop cartoons are built on actions—strings of gags, catchy tunes, and lusty humor—rather than feature a fully developed storyline. Good girl Betty fights off lascivious men and is ultimately rescued with her virtue intact. Often, she rewards her hero with a kiss, but even to them she makes it clear that she is “not that kind of girl.”

Betty the vamp was dominated by men, lusted after by mythical creatures, and most often a “prop” to include sexual content in the cartoons. Her role took many forms, whether she was a performer in musical revues or stage shows, an object of desire in a fantasy sequence, a damsel in distress in a fairy tale, or a novelty in a jazz cartoon.

Betty Boop was a first—the first female star in animation and the Queen of the Animated Screen. Over 90 years from her introduction, she endures as an icon.

The early film industry of the 1920s had a reputation of being morally questionable. Risqué films and content aimed at adults endured until the mid-1930s when the Hays Code, or the Production Code, began to censor film content. In the early 1930s, Betty Boop was a Pre-Code character, a sexpot. To understand her cartoon content today, she must be reviewed in the context of 1930s Pre-Code Hollywood.