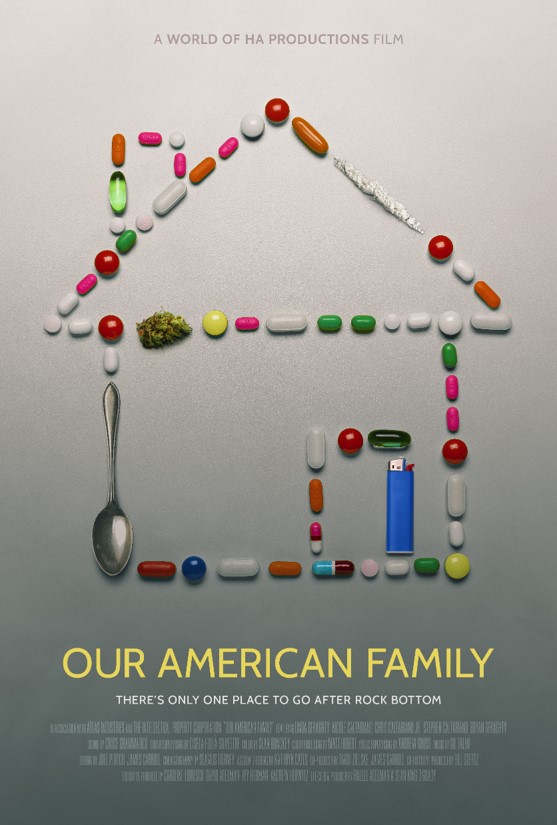 Addiction is an all-encompassing force impacting the lives of the afflicted and everyone around them. Documentary film Our American Family provides an honest, unfiltered look at a close-knit Philadelphia family impacted by generational substance abuse. Captured at a pivotal “nothing to lose/everything at stake” year-long period, five family members tired of life with addiction on center stage struggle to transcend their crippling histories.

What will it take for the family to break the cycle of addiction to help their next generation? The family members of Our American Family take us into their lives for an eye-opening look into family struggles and family ties. They show us what’s possible, helping one another rise out of the deepest depths through love and commitment. By doing this, they show us not only their own family but “Our American Family.”

The award-winning documentary Our American Family opens September 2, 2022 in the U.S. theatrically in New York (Cinema Village), Los Angeles (Laemmle Monica) and will be released September 6, 2022 on VOD in the U.S., U.K. and Canada on all major platforms timed to National Recovery Month.

Filmmaker 5.1:  What is your connection to the film family that allowed you to bring their story to film?

Hallee Adelman: The family from Our American Family lives in my community. When Linda, the family’s matriarch, heard that I was working on a teen novel where one character was struggling with addiction and the other was not, she suggested that I speak with her daughter Nicole, who was struggling with addiction, and her son Stephen who was not. After meeting her children, the family and I remained close. Eight years later the documentary was born out of their deep desire to get rid of stigma related to addiction and help other families who shared similar struggles.

Sean King O’Grady: Hallee has known “Our American Family” for years and me and the rest of the team were fortunate enough to be accepted into this incredible film family.

Filmmaker 5.2:  You assembled a talented crew for Our American Family. How did you as co-directors collaborate to ensure the crew understood and brought to life your vision for the film?

Hallee Adelman: Sean and I both made sure that our crew were not only talented, but were also caring and non-judgmental. This set a tone for the family to feel safe and comfortable. We truly became an extended part of their family. By limiting distance between our participants and crew, we were able to zoom in on the truth and honesty that this brave family wanted to for this film.

Sean King O’Grady: It was truly a mind meld. We set about finding crew who were not only talented, but also who we knew would be committed to telling this family’s story with the same compassion that was such a key element of our direction from day one.

Filmmaker 5.3:  In examining the theme of generational addiction, you could have taken many storytelling approaches. How did you arrive at how you structured Our American Family?

Hallee Adelman: We let the family’s openness and strength guide us. Nicole told us early on that she wanted to show the Nitty Gritty of addiction, but this didn’t mean having images of people with needles in their arms. This meant that we needed to share an honest family story of the struggles and triumphs of early recovery.

Sean King O’Grady: This was the kind of story that really told itself. Our job was to capture it, and then remain true to what we documented every step of the way. While maybe this sounds simple, it was only possible because Hallee took such incredibly detailed notes through the process, and because our editorial team left no stone unturned in digging through our year’s worth of footage.

Filmmaker 5.4:  The Our American Family family experiences moments of extreme conflict, explosive confrontations, and painful realizations as they confront their current reality and past traumas. What impacted you the most as witnesses to this family’s struggles?

Hallee Adelman: I was impacted by how persistent and determined this family is. It’s inspiring to see people who deeply want change for the next generation. That’s why I was also frustrated by the burden of judgement and stigma that society can place on family working so hard to grow.

Sean King O’Grady: It wasn’t the moments of conflict that impacted me the most. It was the moments of love, vulnerability, trust, hope, and bravery that did. The single moment that sticks with me most was seeing Nicole reach the goal she set out for herself at the beginning of the film — spending a night with her daughter. To me, that was the moment of triumph that cemented this as a story of hope and of light conquering the darkness.

Filmmaker 5.5: How is Our American Family a film about every family?

Hallee Adelman: Every family has had a struggle to overcome. Most families choose to hide those struggles. What I learned from the members of Our American Family is that the more these pieces stay hidden, the more they thrive. Our American Family challenges the idea of allowing shame and stigma to win over success, love, and connection.

Sean King O’Grady: Because some version of this story is playing out right now behind closed doors in homes on probably every block in America. The numbers associated with addiction in this country are staggering. Everyone knows someone affected by this issue, or some other form of mental health crisis — the difference here is this family was bold enough to share their story in an effort to help other families — whereas most of the rest of us keep our stories hidden behind closed doors for fear of the social stigma that can come along with them, almost certainly intensifying these problems as a result. It’s also a story about every family because it’s a story of resilience and love — something I hope every family can relate to.

Watch the Our American Family trailer.

2 thoughts on “Filmmaker 5 with Hallee Adelman and Sean King O’Grady: Our American Family”