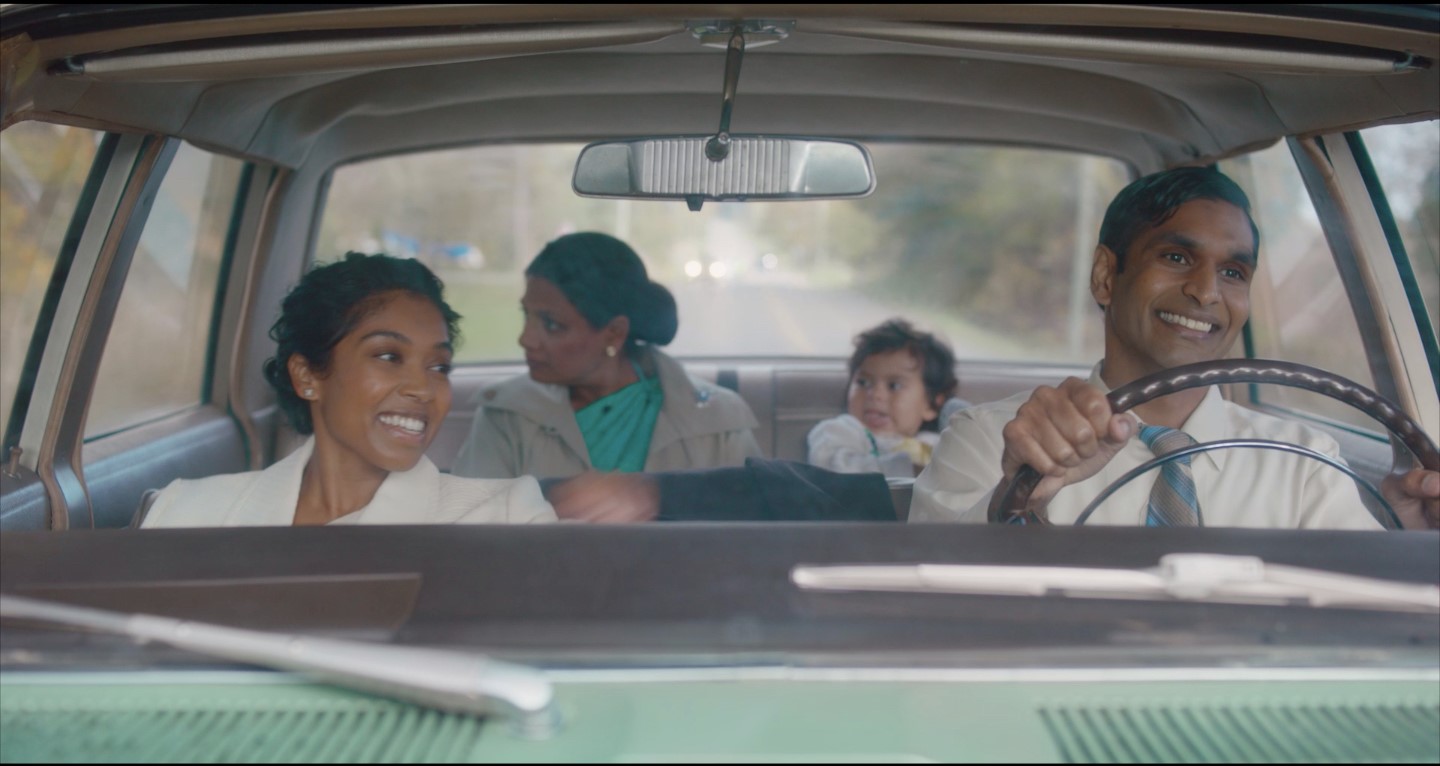 One Small Visit tells the incredible true story of immigrant Indian family the Abrahams, who unexpectedly pass through the Midwest hometown of Neil Armstrong in the wake of the ’69 moon landing. Set against the backdrop of the civil rights movement, the Abrahams experience unease from being racially different as they navigate small town America. Swept up in their excitement to catch a glimpse of the family home of the famed astronaut, they take a giant leap of faith to find themselves on the doorstep of the Armstrong home, crossing the threshold into an experience they will never forget.

Filmmaker 5.1: One Small Visit brings the story of a friend’s family to film. How would you describe your collaboration with the Abrahams as you pursued telling their story?

The Abrahams are amazingly charismatic, warm-hearted, and welcoming. Anyone who meets them is immediately charmed. Our collaboration was so joyful and loving, they really made me feel part of the family. And not just me. Once we brought more of the filmmaking team on board—producers/production designers/cast—they answered so many of our questions, regaled us with so many of their wonderful stories and memories, supplied us with archival footage and photos. It was really wonderful.

Filmmaker 5.2: What ultimately inspired you to transform a charming dinner party anecdote into a short film?

There are several reasons. Hearing Mrs. Abraham recount that afternoon in detail, I saw images unfold before my eyes. One that always stayed with me was that of these Indian women clad in their finest saris walking down Main Street Middle America in 1969. That visual juxtaposition, combined with the fish out of water aspect, struck me as so unusual and mysterious. Another was the dripping ice cream. I thought it was so visually vibrant and quirky it would make a better film than just a written, short story.

As a Chinese Canadian woman who has lived around the world, I’ve long been fascinated by issues of race, identity, belonging and one’s place within different cultures and countries. I thought this would be the perfect opportunity to explore those themes.

I also love that the ’69 moon landing was such a global and historical event and re-telling it from this intimate perspective felt fresh and unusual, and I really wanted to share it with the world.

Filmmaker 5.3: How did your own work as an actor inform how you both selected and directed your actors in One Small Visit?

I select actors for their talent but also on whether or not they are team players and will collaborate with me and each other. All the adult actors in our cast started off in theatre before going into film and TV so they have a penchant for communal creation and service to the script.

I started in theatre and always loved that collective spirit and tried my best to replicate that for this film. One of my favorite things about acting is researching the character and the world they come from. I made sure that all the info I had amassed during the two years was also available for the cast. We were so lucky to have so much access to the Abrahams and so much about the Armstrongs is on public record. It was up to the actors whether or not to use it, but most of them did.

I knew our time with the actors would be fast and furious during the shoot so I made sure we had lots of Zoom calls, direct conversations, and open communication prior to filming. Our cast table read online was so full love and joy. By the time we all finally met in on set we already felt like a family. Once the cameras rolled, I just stepped back and let them strut their brilliant stuff. They are such gifted, generous actors and human beings, I really didn’t have to do much.

Filmmaker 5.4: Independent filmmakers often face constraints requiring innovation. How did the momentum of production influence how you structured the final film?

Yes, innovation and improvisation were key. We only had six days for seven locations. There was simply no time or budget for more. Three out of those days we had cold and rainy days. Luckily, we had moved indoors by then. My DP and his crew had to make sure our interiors still felt sunlit and warm. That required a lot of last-minute trips to Home Depot and wildly creative tricks for lighting. Our period rental car conked out when it was time for it to run on the very first day which impacted the final ending so I had to quickly change that. During the climactic scene our very young toddler actor decided she had had enough of being in front of the camera so we had to carry on without her. I rewrote that scene on the spot; the actors all acted to a stuffed toy elephant as her stand in. Many subsequent scenes we had to shoot around her. At one point I was like who is the idiot writer who decided to have both vintage cars and child actors, two things you should try to avoid whenever possible as the adage goes. I laughed as I only had myself to blame!

Filmmaker 5.5: What do you hope your storytelling in One Small Visit communicates to audiences about the microcosm of family? About the macrocosm of society?

Within a family, members can have different views about the world based upon their experiences. In the case of the Abrahams, each had a varied perception about America ranging from an almost overly optimistic outlook to a more guarded one. In terms of society, I hope that audiences can take away that if different cultures and groups took the time to listen to each other with kindness and curiosity they’ll find they often share similar values, hopes, and dreams.