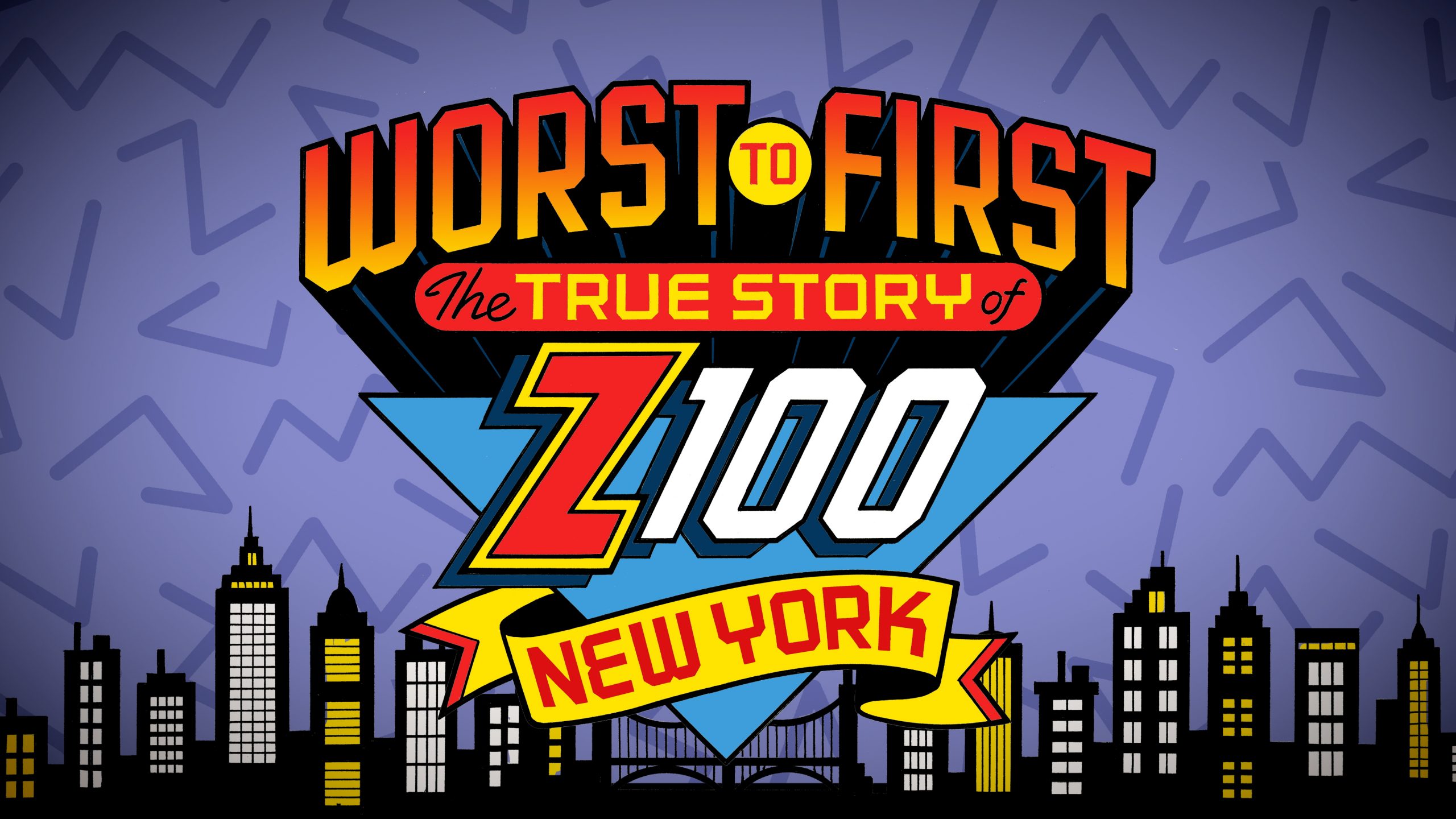 In 1983, Z100 radio station began broadcasting from Secaucus, New Jersey to reach the New York City market dominated by media giants. Fast-talking and fast-thinking deejay from Tampa, Florida Scott Shannon moved north and vowed to take the station from Worst to First, brashly challenging the competition and enlisting New Yorkers to his cause. Shannon assembled a band of bold personalities to join his quest at a time when DJs had to buy their own records just to have music to play on air and musicians were loathe to make the trek from the city to New Jersey to appear on air. That all changed soon enough. Seventy-four days and a lot of shenanigans later, Z100 had climbed to #1. And there it stayed.

Feature-length documentary Worst to First: The True Story of Z100 New York tells the against-all-odds inspirational story, featuring Scott Shannon and Hall of Fame radio personalities and entertainment industry legends like Clive Davis and Elvis Duran. Iconic artists who got their start on Z100 Jon Bon Jovi, Joan Jett, and Nile Rodgers and era superstars Debbie Gibson and Taylor Dayne share their personal stories of the importance of Z100 radio for their careers. A passion project for filmmaker Mitchell Stuart, Classic Couple Academy recently asked him about making Worst to First, available February 11 on Cable and VOD in the U.S and Canada. Our Filmmaker 5 with Mitchell Stuart follows.

Filmmaker 5.1: This film blends archival material with numerous interviews to tell the Z100 story. What was your process in selecting what to keep and what to toss in production?

You have to be ruthless with the material. In my case, I get to work with the absolute best editors that I could have ever wished for. HQ Creative’s Head of Post, Alex Dolginko and our Sr. Editor, Corey Williams. Ruthlessness means cutting any scene, frame or interview that does not move the story forward regardless of one’s emotional tie to that particular piece of content. As much as that sounds like Filmmaking 101, until you’ve worked on a film like Worst to First: The True Story of Z100 New York for more than two years and every nuisance seems like an expression of your art, it’s hard to imagine how difficult it is. In fact, our first cut was more than 2 hours of amazing content which ended up 64 minutes of what I hope an audience will find authentic, cool, fun storytelling.

Filmmaker 5.2: Worst to First is a David and Goliath story, merry band of misfits’ tale, 1980s flashback, pop culture commentary, music legend showcase and more. As a filmmaker, how did you sort through that myriad of storytelling elements to structure the film?

I always start with, “What story do I want to tell?” Often with docs you’re passionate about the subject matter, but you don’t know what story best illustrates what you’re passionate about in the first place. As you suggested, the story of the launch of Z100 presented a myriad or two or five myriads to consider. We filmed during a period of nearly two years. We had 20 hours of incredible interviews, a wealth of archival video shot by the legendary Art Vuolo in the Z100 studio, newspaper headlines, magazine stories, and so many airchecks from the day. After all that, all roads pointed to the time period that took the station from Worst to First in 74 days. Scott Shannon, going with his gut instincts and hand picking a disparate band of misfits and creating a viral-like campaign; decades before going viral on the internet was something to aspire to. In the marketplace of 2022, it’s a story that can never again be repeated.

Filmmaker 5.3: What was your biggest a-ha moment in making this film? Conversely, any oh-#$%! Moments?

Great question, thank you! So my company, HQ Creative and I were fortunate enough to work with Z100 New York for many amazing years. We created commercials, worked on what was then called Z100’s Jingle Ball concert, and even got the opportunity to help collaborate in the creation of then Clear Channel’s initial expansion to online with a music series Stripped Raw & Real. So even with that background, I had no idea how the station was created. None. It was as if Z100 was always part of New York. It wasn’t until I got the call to possibly work on the film, that I learned Scott Shannon had created it back in 1983. I thought of him as the WPLJ guy. That aha moment is captured on the film when I mentioned to Gavin (DeGraw) that we were making the film on how Scott had created the station. That look on his face when you watch the film was pretty close to my reaction, holy sh&t.

Filmmaker 5.4: What do you want audiences to take away from experiencing Worst to First—especially in this era of consolidated corporate media?

Artists in any era need patrons to survive and to get their art to the public. That’s just the way it’s always been from Michaelangelo to Martin Scorsese. Scott was hired by a corporation called Mal-rite who had just bought this inconsequential station in Secaucus, NJ and they wanted him to take on legendary, iconic radio stations in a marketplace that was already saturated. After what was a tempestuous meeting with Malrite’s senior staff in which Scott demanded that they let him do things his way, the owner, Milton Maltz decided to give Scott that artistic freedom. Scott and his flamethrower style, empowered by Malrite, did the impossible.

So I hope the takeaway is that artists of any age are inspired to go for it. Get on their phone and create. There’s an ever-expanding option of platforms to reach consumers now. They don’t need permission like the artists that came before them. And if their artform of choice speaks to someone as relatable and authentic, they can be like Scott was in 1983 and all the inspiring innovators that came before them… they get to be disruptors.

Filmmaker 5.5: Music is at the core of your work covering the many facets of the entertainment industry. What about the Z100 story compelled you to add this film to the Mitchell Stuart canon?

I started as a musician and music remains the biggest driving force in my pursuit of storytelling. Like other musicians, I hear music in the tempo of how someone speaks. The street sounds of the city or country. Music just is. Like so many people born prior to the internet, I first heard music on the radio. That’s how we consumed music. So my personal journey led me to Z100, and the station empowered me to work with more than 200 of the most talented musicians in the world… some at the very beginning of their career… it was that full circle opportunity I could not turn down… and hey, to complete the circle, I also scored the film so it’s all been a true labor of love.

Watch the Worst to First: The True Story of Z100 New York trailer

2 thoughts on “Filmmaker 5 with Mitchell Stuart”