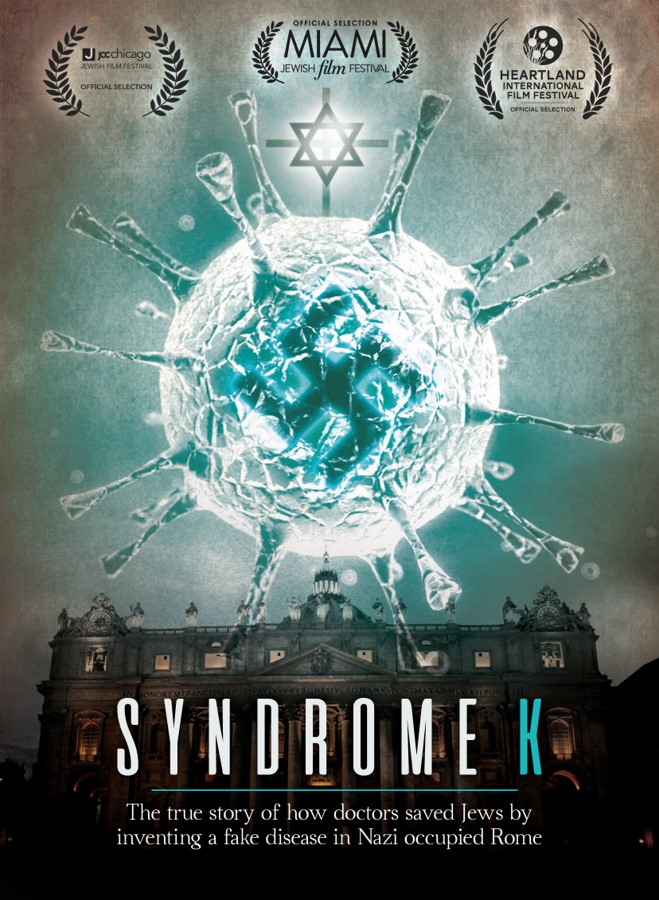 Syndrome K recounts the incredible story of three courageous doctors working in a hospital in Rome during World War II. Fatebenefratelli Hospital, directly across the the Tiber River from Rome’s Jewish ghetto became a refuge for Jews. The hospital’s doctors invented a highly contagious and deadly disease they called Syndrome K. Isolated entire Jewish families in the Syndrome K ward, they kept the Nazi SS, who were afraid to enter. The Syndrome K ruse saved countless Jews in Rome until June 4, 1944 when U.S. forces led by General Mark Clark liberated Rome.

The story of Syndrome K and the heroic doctors and network of Roman Catholic priests who worked tirelessly to save Roman Jews has never been told until now. Syndrome K the documentary tells the astonishing story of ordinary people exhibiting extraordinary bravery to thwart evil and save Jewish lives during the World War II Nazi occupation of Rome.

Filmmaker 5.1: How did you come to discover this story? What was your research process?

It was such a random happening because I was literally, stalling. I write music for a living, and I’m always going to my computer when I get a writer’s block. I saw this meme that two musician colleagues had posted about Syndrome K and doctors saving patients by making up a fake disease. I’m like, wow, this is really cool. I’ve never heard the story and I want to see the doc.

I looked and there was nothing. And this story is too good—it’s like film gold as the best elevator pitch in movie history. Three doctors make up a fake disease right under the nose of the SS and they save hundreds of Jews from certain deportation to concentration camps. Oh, and one of the doctors was a Jew, practicing in a Catholic hospital with a fake identity saving members of his own family.

So literally, in the span of 120 seconds, I went from discovering the story to saying alright, I’m going to dedicate the next year and a half of my life to making this film. The first thing I did was find Dr. Ossicini who was still alive at 98 years old. We went into overdrive because he’s very elderly. I also happen to be an Italian citizen, so I got my butt over there and started interviews. Then we went to shoot at the hospital, and we came back with all this footage.

This film is so easy to talk about it because it’s just so cool. Stories that are great are rare as hen’s teeth. They’re hard, hard, hard, hard to find. That’s the goal; our business is to find a great story to tell. And you come across a few of them in your whole life. Why did it come to little old me—a guy writing music for movies, living in Los Angeles? Like serendipity it just rolled into my lap. It’s kind of remarkable.

Filmmaker 5.2: You were able to meet and interview Dr. Ossicini—the inventor of Syndrome K—for the film. What stands out for you the most about that experience?

Meeting Dr. Ossicini, because he was the one of the original three, was definitely the highlight. It’s not very many times in my life where I have gotten to sit with a real true-life hero. Meeting a true-life hero like that was one of the coolest things I’ve ever done.

He talked in Italian with my translator, and then, at the end of the interview, he looked over at me and he started speaking in French to me—perfect French. I speak fluent French, so we started having a back-and-forth conversation in French. I thought it was weird that he looked at me—this American kid whose mother was Sicilian and whose father was Irish, who just happened to learn French in high school—and he started speaking to me in French. It was such a cool experience.

Filmmaker 5.3: With over 20 years as a film and television composer, how does your experience as a composer inform how you approach your work as a filmmaker?

I’m kind of the last guy that pulls the ball over the finish line, right? The director spots the film, they cut the film, they lock their picture, and then they hand me the cut, and I write music to the cut.

I’ve been around directors for a couple of decades watching them work and watching them. Every movie that you make is a battle to get it done. You’ve got to fight, and you’ve got to persevere because everybody’s going to tell you you can’t do it. And then somehow, at the end, you end up with the movie.

The one thing I am is relentless, and I don’t give up if I think there is something I need to do. I will follow it through; it will get done. That’s what I said when I started—that this is a story that without a question needs to be told.

Filmmaker 5.4: You also composed the score for the film. What was your process in creating this score?

This is a World War II story. It’s a world story. I thought let’s have a world orchestra. So, I passed out cues to different orchestras. The score ended up being performed by six orchestras around the world: London, Belgrade, Prague, Rome, Moscow, and Hollywood. They all contributed to the film, and then I conducted the Hollywood recording session.

I say is the coolest thing I’ve ever done. It was just a great experience to be able to be the guy and hire myself. When we were cutting the movie, my editor would send me cuts and then I would take the cuts and I would start writing music. As we went it became very apparent how it was going to be and what got taken out and what to put in. It’s a real musical pastiche.

Filmmaker 5.5: Syndrome K is perhaps Ray Liotta’s last narration project. How did he get involved with the film? Why this voice?

It’s funny because one of my favorite films of all times is Goodfellas and Ray is the narrator of Goodfellas. If I back up, my 24-year-old daughter Bella went through K through eight and nine through 12 with Carson Liotta, Ray’s daughter. They’ve been friends for a long time.

We were getting to the point where we had to do some of the narration, and I thought Ray would be amazing. So, I sent him an email and said, “Hey, Ray, Steve Edwards, Bella’s dad. I did this documentary Syndrome K story, three doctors, fake disease, blah, blah, blah. Would you possibly be interested in being our narrator?” I sent the email and it got to his phone when he was at the Toronto International Film Festival with his daughter Carson. And as funny goes, he asks Carson who’s Steven Edwards and who’s Bella Edwards. She reminds him it’s Bella that I’ve known since first grade. So, I think she might have had some coercion there. Ray replied, “Yeah, I’d love to do it.”

A couple of weeks later, my editor, Greg Hunter, and my writer, Greg Ballard, came over to work with me. An hour before Ray got here, we watched the first 30-40 minutes of Goodfellas, and we just looked at each other saying how did we get this guy that is arguably one of the greatest narrations in the history of cinema? We couldn’t believe this guy’s coming over to my studio. And he couldn’t have been nicer. He was fun to work with and such a pro. We gave him a hard job because of the names and all the Italian words. He did the whole movie in three hours—three hours, knocked it out. A professional. Done.

And he is the voice of the movie. He is the tour guide. He takes us through the story.

I am so grateful that he gave us a day of his time. I just didn’t expect it and, of course, we were so sorry when he just passed away. We were just shocked. Bella and Carson have chatted a little bit since and she sent her a link to the film. I’m so grateful to have worked with him.

Watch the Syndrome K trailer. Syndrome K will be available to rent and to own on all TVOD/Digital platforms beginning on August 16, 2022 through Freestyle Digital Media.